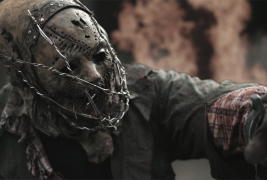 We can’t get to the movie — Cry Havoc — until we address the elephant in the room. That elephant is the late Charles Bronson, the rugged he-man of the Death Wish movies and so many others in the ’60s (The Magnificent Seven, The Dirty Dozen), ’70s (Hard Times, Breakheart Pass) and ’80s (10 To Midnight, The Evil That Men Do).

Bronson was no matinee idol; his rugged, ragged face looked like he shaved with coarse sandpaper. Still, back then, his name was synonymous with action, and his name could carry a picture.

But that was then. Bronson died in 2003 at the age of 81. So far as we know, he’s still dead — not walking around with the Whisperers near Arlington or haunting some Hollywood film set.

Which brings us at last to Cry Havoc, the just-released Rene Perez film that stars Hungarian-born Robert Bronzi (his real last name is Kovacs) as a police detective searching for an estranged daughter whose bad fortune has her in the clutches of a serial killer (Havoc, played menacingly by J.D. Angstadt), who is a byproduct of a rich, sick, snuff film entrepreneur known as The Voyeur (Richard Tyson).

Now, full disclosure: Perez previously helmed a picture called Death Kiss, which also starred Bronzi and Tyson. This is a sequel of sorts, but I never saw Death Kiss. This is my first exposure both to Bronzi and Perez. So, when I say Bronzi IS Bronson, you have to take my word for it. He’s more than a doppelganger; he could be That Guy reincarnated. Apart from the looks and the clothing (bell bottoms, wide-collar shirt, black leather jacket straight out of the ’80s), Bronzi’s voice — probably dubbed — is identical, not that he’s given many lines.

So what you have here is a jaw-dropping cinematic experience that has absolutely nothing to do with the quality of the movie. Perhaps we should address that.

Turns out she’s not alone. Several other girls have found their way into Havoc’s clutches, whose vicious murder methods are caught by The Voyeur’s gazillion video cameras and then distributed as “performance art” to the kind of people willing to pay for a look at breasts, blood and unimaginable brutality. 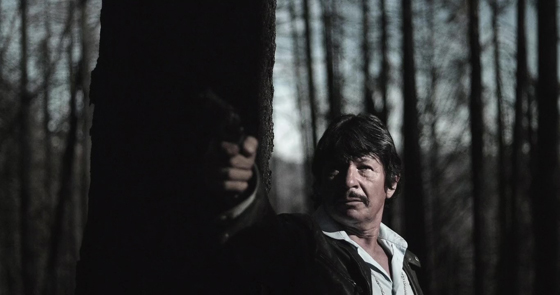 And when we say brutality, we mean saws, sledgehammers, drills, axes and the resultant body parts strewn hither and yon. If you like your entrails fresh, you’ve come to the right place.

The gore here is on par with the Saw and Hostel franchises, so don’t say you haven’t been warned.

But we digress. Ellen (Emily Sweet), an ambitious TV reporter, thinks she’s lucked into the scoop of all scoops when The Voyeur agrees to an interview. She shows up at the compound escorted by a lawyerly woman who represents the interviewee. Before she gains entrance, members of the compound’s well-armed militia, strip her of her phone, her tablet … her journalistic integrity for that matter. She’s forced to don new clothing then is ushered in to see The Voyeur. She promptly insults him by correctly eschewing his “performance art” terminology for the correct label, snuff films.

If you can’t see what’s coming next, you’re not paying attention. Ellen is on the run. She fortuitously stumbles upon the detective, who’s been lurking in the woods staking out the compound while hoping to find his daughter. Gun battles ensue (and it’s comical just how bad the shooting is from the machine gun-toting militia). More gore ensues. An ending (of sorts) ensues.

How can we wrap this up without spoiling anything? Well, for starters, we can say Bronzi/Bronson makes a great hero. He’s no savior, but he’s fun to watch. His acting skills, while limited, are sufficient for the part. In that sense, he’s on par with Sweet, who’s performance as Ellen is uneven but passable. Tyson, who’s had much better roles in films like Three O’Clock High, Kindergarten Cop and The Visitation, makes the most of his material here.

But what makes this work isn’t the acting or the dialogue; it’s the atmosphere. Perez keeps the lights on for most of the gore, so there are some jump jolts to go along with the stomach-churning scenes. The cinematography is eerily appropriate; the music fair to middlin’.

Yet somehow, taken in its entirety, this is a movie that grabs your attention and holds you till the end. The Bronson connection helps, of course, because it’s hard to take your eyes off of Bronzi. But Cry Havoc has just enough inventiveness and pace to make it 90 minutes well spent. 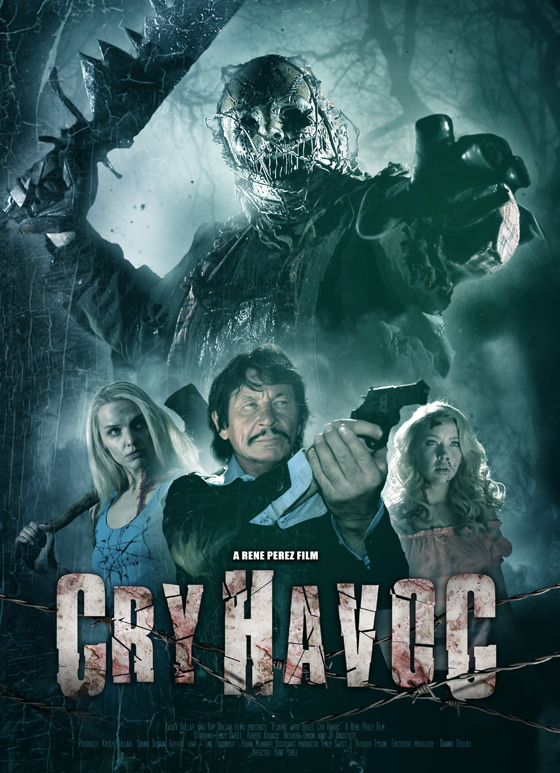