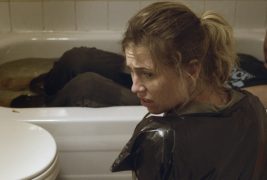 I am excited to announce that I have discovered a completely original and completely engaging horror film called, of all things, Dead Dicks. Yeah, I was hesitant when I first saw the title and I was pretty sure this movie would be another one to throw on the dud pile. However, I was absolutely surprised by this offering once I gave it a chance. Dead Dicks may be a humorous title, but the story deals with a very serious matter in a way that hits on all points. It’s cerebral, darkly comedic and it’s got moments of enjoyable gory/sci-fi moments. And there are a few emotional bits as well.

The writer/director duo of Chris Bavota and Lee Paula Springer brings us this disturbingly bizarre tale of being physically, emotionally, and mentally trapped. Dead Dicks starts off with someone popping some corn in the microwave while another person sits in a chair in the kitchen and puts a plastic bag over their head. When the microwave beeps, both the popcorn and the person with the bagged head are done. What a way to kick things off, no?

Moving along, we meet the two main characters, named Becca (Jillian Harris) and Richie (Heston Horwin). These two are siblings, and we only really find this out once Becca receives a distressing message from Richie to come to his place immediately because something really strange has happened and he’s scared. Becca arrives at his apartment building, but has to deal with Richie’s asshole downstairs neighbor, Matt (Matt Keyes), beforehand. Matt complains to Becca about Richie’s music being too loud and the vibrations coming from his apartment being disruptive. Matt also threatens to call the super on Richie if the annoyances don’t stop.

Eventually, Becca goes on up to her brother’s apartment and is greeted in a shocking manner. I guess I should stop here and give you a heads up that there’s a decent amount of full male frontal nudity in Dead Dicks, so there ya go. 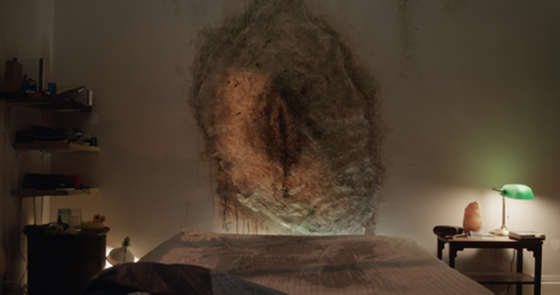 Seeing her brother naked isn’t the only thing that freaks Becca out. Seeing her brother’s dead bodies, yep, bodies, strewn around his apartment kind of throws her for a loop. I mean, no shit, right? The whole reason Richie wanted Becca to come over is to show her the weirdness that’s been going on. He takes her to his room to show her the grotesque genitalic…thing…on his wall above the bed.

Basically, he explains that every time he kills himself, there’s a rebirthing of sorts that takes place through the giant vagina/anus entity. He goes on to explain that he’s brought back to “life” right at the point he died, thus the reason for all of the other dead Richies (or Dicks) lying around the apartment. To drive the point home even further, Richie demonstrates how it all works so that Becca can witness it for herself. Once Becca realizes the madness, she tries to help Richie figure out a way to stop it, but there’s not an easy solution. Also, that asshole neighbor downstairs doesn’t make things any easier.

Anyway, I don’t want to give much more away, but there’s some good goriness and twists and turns within the plot of Dead Dicks. As I’d mentioned before, there are some emotional bits thrown in as we learn more about the severe co-dependency the siblings have with each other, including the mental health struggles they both deal with. There’s not a whole lot of backstory or explanation for a few things in this film and that’s a shame, but we can assume why certain things happen.

In wrapping this up, Dead Dicks is worth a watch. Like I said before, it’s a fresh idea in a world full of remakes and reboots. The acting is well done, the storyline flows pretty smoothly for the most part and the gore and effects are enjoyable for what they are. This is a low-budget film, but it’s not a horribly done production. I think the creators of Dead Dicks did a really great job with the resources they had and I can’t wait to see what they are able to do with a bigger budget!

If you want to give this film a watch, you can currently rent it on Amazon Prime for $4.99. 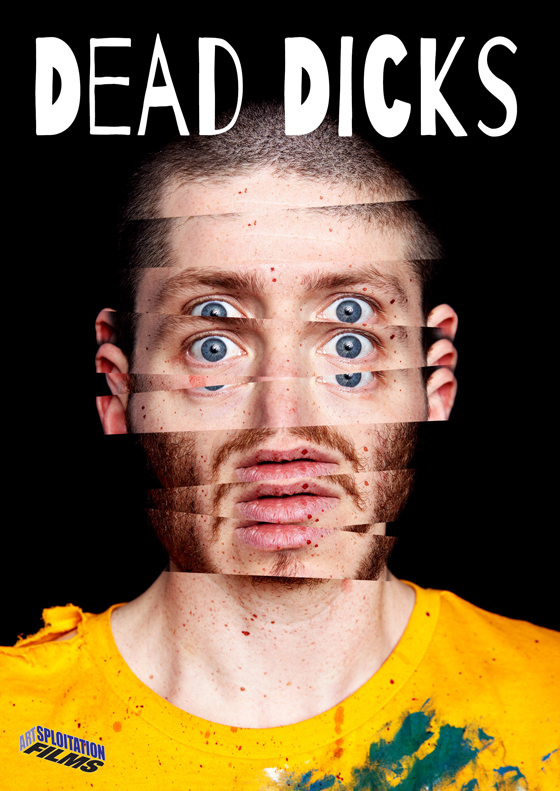