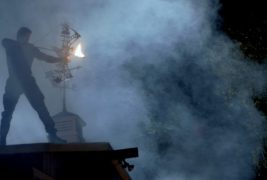 Welcome to Tropeland. The Horde hits them all. Directed by Jared Cohn and written and starring Paul Logan, The Horde is discount bin bloodletting, with a slapdash of direct-to-video stupidity. Logan, who has an extensive career as a subpar Steven Seagal, plays John Crenshaw, an ex-Navy SEAL who’s madly in love with a photography professor named Selina (played by Tiffany Brouwer). In fact, Crenshaw plans on popping the question over dinner at some swank eatery, but Selina informs him that she’s taking her students out on a nature excursion as an extra credit project. Reluctantly, Crenshaw agrees to go. Selina is over the moon, except she makes sure that Crenshaw does not take his M9 service pistol along for the ride. Kids, this is called foreshadowing.

True to form, the kids in Selina’s class are a wide array of dipshits. The best of them all are Hailey (played by Sydney Sweeney) and Derrick (played by John Omohundro), a couple of all-American twentysomethings. The other couple includes Sheila (played by Elisabeth Ferrara) and Chris (played by Jack David Frank), who everyone jokes are “part rabbit” because of their fondness for fondling each other. Last and certainly least there’s Riley (played by Thomas Ochoa), a spoiled, effeminate rich kid whose only purpose in the entire movie is to get butchered. Because this is a horror movie set in the woods of Oregon (Oregon, by the way, looks an awful lot like southern California in this flick), you just know that these suburbanites are bound to cross paths with your standard gaggle of menacing rednecks.

In The Horde, the white trash weirdos are especially deadly. Led by an escaped murderer named Cylus (played by Costas Mandylor), the aggressors in this film are a pack of literal mutants who were turned fuggly by overexposure to uranium. Now radioactive, these backwoods toxic avengers like the taste of human flesh and like raping “breeders” (see: women) even more. As for Cylus, his non-mutant henchmen, Stone (played by former NFL offensive tackle Matthew Willig) and Wilson (played by Devin Reeve), run a lucrative meth ring that includes a large segment of the outlying population. The mutants keep prying eyes away, while the meth lab keeps the non-mutants wealthy. It’s…an arrangement.

It’s no big reveal to say that these two parties cross paths. It is also no surprise that Crenshaw kicks a lot of tail, with hand-to-hand combat sequences given a lot of airtime. There’s blood, but it’s all bad CGI. There’s dialogue, but it’s all turdtacular. Even the great Bill Moseley, who plays a bartender, can’t save this stinker. The Horde’s only redeeming value is that it’s so gloriously dumb and derivative. This film, which feels like a lost Halloween episode of Walker, Texas Ranger, is The Hills Have Eyes (or rather The Public Park Has Eyes) mixed with every cruddy free movie currently streaming on Netflix or Amazon Prime. My advice: watch The Horde while sufficiently bored and blotto. 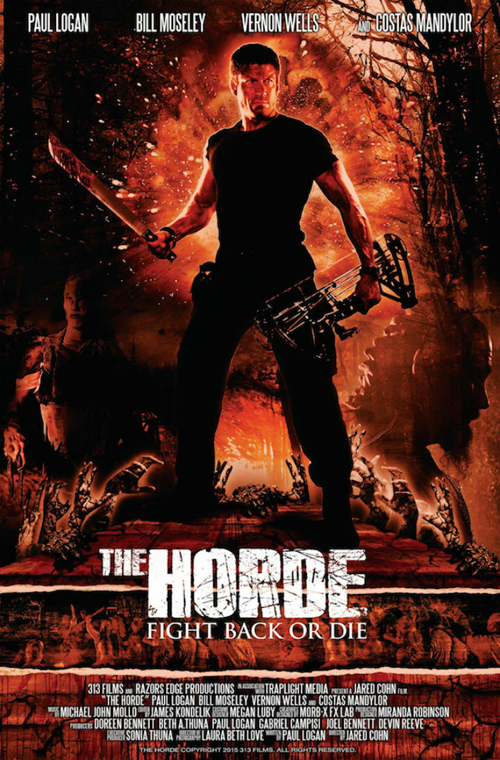