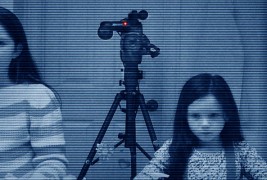 Ravenous Monster’s resident horror humorist Billy Boyce is back with a look at PARANORMAL ACTIVITY 3….

The PARANORMAL ACTIVITY series is perfectly woven together like the immaculate ‘do on Tyra Banks’ galactic head.  I have been waiting for this poisonous little romper since I found out it was a definite green light.

If you paid close attention to the previous PARANORMAL ACTIVITY movies, you will see all the little tie-ins that make the continuity of this trilogy flawless, and a real treat to watch.  I am not going to bother you with the usual gospel of who the actors, writers, producers, and directors are.  I much rather tell you about the guts of the film.  If you absolutely, positively need to know who did what, you can just cruise on over to the Internet Movie Database for your fact-fix.  Also, while you’re there you can read useless info like who has a retarded sister or who proudly confesses they have a third, fourth, and fifth nipple.

PARANORMAL ACTIVITY 3 is another prequel; a rarity in the film industry wherein the timeline of the films flows backwards.  It follows the lives of voluptuous sisters, Katie and Kristi Rey.  But this time they are only five and eight years old and certainly not yet “racked-up” as I’ve grown accustomed. This movie definitely answers some of your queries, and raises others.  Especially during the last five minutes.  I couldn’t help screaming the same things the characters were: “Holy shit!” and “What the fuck?”

PARANORMAL ACTIVITY 3 utilizes the same breath-holding techniques as in the previous films. Cameras are set up around the house, balanced by the use of point-of-view filming.  Even though this is the basis of PARANORMAL ACTIVITY 1 and 2, there are creative twists like an oscillating camera that sustains the potent feeling of anxiety throughout the whole film.  I assure you this modus operandi is not worn out and it even builds suspense more than the sum of the other two films.

Have you ever seen a movie that you thought was going to be fantastic only to find out that you have seen every joke, shocker, and twist in the trailer?  That sure isn’t the deal with this flick.  You do not see ONE fright you have already seen.  That was super-fresh. I also was pleased on how many jumpy freak-outs there are.  There are way more than before, but not enough to where the movie becomes cheesy and predictable.  Even if you do call something right, like the “sheet scene”, it will still make your heart do the fucking moonwalk.  Surprisingly, with every knuckle bite, there is a humorous scene to match. Sometimes even at the same time.  Your psyche is constantly ping-ponging through different emotions, adding an increasing feeling of uncertainty.  I found myself constantly holding my breath, cowering and wincing during the whole 85 minutes, which gladly felt like two hours.

What’s great to see is that each movie is better than its predecessor.  Another definite rarity in the realm of a movie franchise, for sure.  If you’re a fan, then your thirst shall be quenched, for you have chosen wisely to see the magic of these moving pictures (See what I did there?).

And the best part about where the films left-off, is that the story can again go backwards, which I’m positive it will due to the sick ending, or move forward and see WTF Katie is going to do after kidnapping her nephew, Hunter.  I hope both will happen.

I must insist you see PARANORMAL ACTIVITY 3 immediately.  Watching it with a packed audience was A-W-E-S-O-M-E, and the best theater experience I have ever been a part of.  The camaraderie and brotherhood you have with other movie-goers is precious.  You’re all in the same boat.  It’s you all against the movie, laughing, gasping, and sometimes swearing.  It was fun as hell.  So, grab a date, snag a big group of pals, go see it alone, whatever.  Even if you’re not a huge fan of the paranormal, it is one choice experience you won’t forget, I swear.