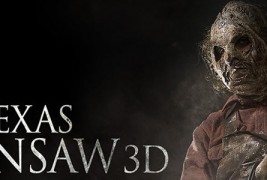 The intro to this most recent Massacre of the Texas Chainsaw franchise starts where the ’74 original ends, showing Sally fleeing as Leatherface chases after her which dovetails into the new plot showing the town folk (who are obviously sick of all the murdering and the cannibalizing and the chainsawing and what have you) rise up to torch Leatherface’s home. As soon as the house is ablaze, everyone is assured that Leatherface and his family are destroyed, but guess what? They’re not.

There are two survivors of the blaze — Leatherface, who ends up living in his grandmother’s basement and tanning human skin into leather (I think we all saw that coming at some point), and an innocent baby girl.  She’s adopted by a white trash family and grows up to be the beautiful Heather (Alexandra Daddario) who’s clearly been doing ab crunches since the age of two in an effort to get her tummy toned and as flat as one of Trey Songz’s hat bills (Songz is an R&B singer who plays Ryan).

Heather finds out that she has inherited a mansion in Texas from family she didn’t know that she had, and she rounds up her boyfriend and some pals to go on a super cool road trip to the place where they end up being massacred by a Texas chainsaw massacre-er. That terrible description of the first half is just about as dumb to read as it is to watch unfold before your eyes with every in-your-face blood splat and revving chainsaw jutting out from the screen.

The first half of the film is extremely predictable.  We watch Heather and her sexual companions including her BF Ryan (Tremaine “Trey Songz” Neverson), her BFF Nikki (Tania Raymonde), Nikki’s crush Kenny (Keram Malicki-Sanchez), and The Hitchhiker with No Name (Scott Eastwood–Clint Eastwood’s million dollar baby) all getting half-naked and then massacred Texas chainsaw style, one by one.

Toward the end of the film, there’s an odd twist where Heather finds herself teaming up with her old cuz, Leatherface, against the town’s asshole mayor and his minions. The film even attempts to make you sympathize with Leatherface by rationalizing his cannibalistic, chainsaw murdering ways as an act of rebellion by a man-child crying out for help because he’s forced to repress his feelings.

All and all, Texas Chainsaw 3D is like a bad acid trip with bad in-your-face 3D, cheap scares and a tie-in to the original franchise timeline that you have to be extremely high to begin to grasp. Despite how disappointing the film is, Dan Yeager makes for a pretty menacing Leatherface, and fans might appreciate the cameos from the original Leatherface, Gunnar Hansen, and the original heroine Marilyn Burns, as well as Bill “Choptop” Moseley from TCM2. 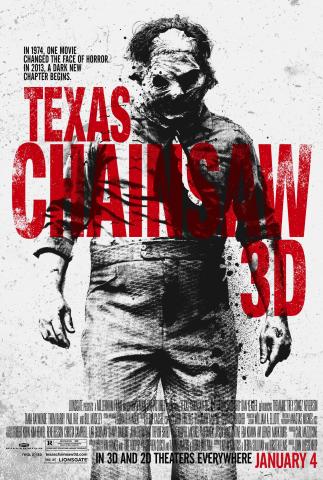