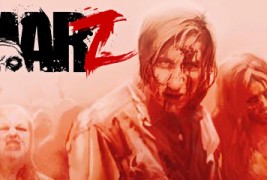 I’ve ranted in the past about the video game industry’s obsession with zombies and the lazy game-making behind it.  I honestly never thought I’d see the day when a zombie game not only caught my attention, but actually frightened me.  Of course, that was before I downloaded The War Z.

The War Z has been in development since 2011, but had its foundation release mid-December of 2012.  The War Z got off to a bit of a rocky start.  Competition from another popular zombie game, DayZ, forced the developers to release it earlier than anticipated, and the alpha release was not accurately marked as such.  This has led some people to complain about the game’s roughness and incompleteness, and Steam offered refunds to players who bought the alpha expecting a fully functional, polished game.  The developers haven’t been great at communicating with the community, and many of the reported features still have not been added to the foundation release.  Nevertheless, despite a few bumps in the road, The War Z already has over 700,000 players and lots of promise.

The game is deceptively simple.  You begin by creating a character, which then spawns randomly somewhere on the rather large map.  At present, the only available map is set in Colorado, but the developers have promised more maps as the game progresses.  For now, the space is plenty large; you’re lucky indeed if you can get from one end to the other without dying several times.  Your goal is to survive the onslaught of undead, avoid desperate civilians and gather enough supplies to keep yourself alive.  As you kill zombies, you gain experience that can be traded in for items and customizable character skins; later, you’ll be able to trade experience in for skills.

Your first few characters start off with minimal gear:  a flashlight, some bandages and a bit of food.  After a while, though, your new characters stop respawning with fresh gear, so you have to budget your resources carefully.  Indeed, most of your time in The War Z world will be spent searching for and collecting supplies.  You have food, water and health meters that must be tended to with the appropriate items and you can collect weapons and armor to improve your chances of survival.  Spawns are rare, and correspond to the real-world rarity of the item you find; baseball bats and hammers are fairly common, but hunting knives are rarer, for example.  If you get good items, you can try to make it back to one of the safe zones on the map to drop it into your global bank, but the path there is often treacherous.

Realism is an aspect that the developers are clearly concerned with maintaining in The War Z.  Head shots do more damage than blows to the body.  Falls, even from a small distance, can cause damage.  The game alternates between night and day each hour, and traveling by night provides ample cover but pitifully little visibility.  Guns are rare, and finding matching ammunition is even harder.  The challenge of finding gear helps to balance the relatively dull combat with the zombies themselves (continued after the pic). 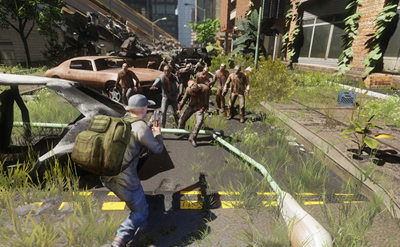 And if this is where the game stopped, it would be just another run-of-the-mill zombie-killing snooze-fest.  But where The War Z really shines is not the ho-hum PVE experience, but in its open-world PVP.  Players are free to kill each other, trade with each other or team up to form alliances.  Considering the rarity of item spawns, killing other players for their gear is a valid survival strategy; on the other hand, your aggression will mark you as a target for anybody who comes across you later.  And this is where the game begins to become something truly interesting:  the game genuinely forces you into a survival situation where real-time interaction with other players straddles a mix of regular conversation and role-playing.

Different people will approach this aspect quite differently.  My boyfriend, who’s instantly suspicious of everyone, follows the adage of “The best defense is a good offense.”  He’s a shoot first, ask questions later type of player – an aggressive strategy that works well when he’s well-armed, but invites trouble from snipers and others with better gear.  I follow a more diplomatic strategy:  I call out my presence in the proximity chat when I approach a new city and try to make allies with the people I come across.  Sometimes this works, and the other player will gift me with supplies or even form a brief alliance with me.  Other times, the player simply shoots me on sight – or I and my new allies are shot by an opportunistic third party.  You never know what will happen, and the uncertainty of this unscripted action will keep you on your toes.

In addition to the open-world PVP and addictively simple gameplay, The War Z has something that many other games in its class can’t claim: It’s genuinely frightening.  This is due in part to the knowledge that you’re never entirely safe from other players, and in part because of its well-crafted soundtrack.  There is no music in the game, but the ambient noises are realistic and spooky.  Various sound effects let you know when events are happening in the game:  when another player comes within range, when items spawn, when zombies spawn, when you’re leaving a safe zone.  Learning to recognize the sounds is the first step to surviving, but the cues may sometimes be too late to make much difference.

As another fun twist, players can pay to leave notes inside the game. These snippets of story help to lend realism and personality to the game, and they’re a fun aspect of crowd-sourced world-building that more indie games should take advantage of.

The War Z is best played with a partner or group.  Although it’s fun to make alliances in-game, the chances of meeting someone who’s both skilled and trustworthy are fairly slim.  Meeting up with friends you know you can trust will make the game less frustrating, and small groups stand the best chance of surviving against both zombies and fellow players.  If you can manage to get a big enough posse gathered, you can even claim a portion of the map for yourselves and barricade yourselves against the world.

For all of its many benefits, The War Z does have a handful of flaws.  First, the game is very new, and still very rough.  The map is large but limited, and the PVE experience can feel redundant after a few hours.   There are a few glitches and exploitable hacks, and many of the advertised abilities are not yet available.  The game isn’t as polished as its competitor, DayZ, but it has more room to grow.  Although it got off to a rocky start, The War Z is a fun, frightening game with amazing potential; the experience can only improve from here.  If you’d like to join in the fray, you can currently download the game from its website:  http://thewarz.com for $15.