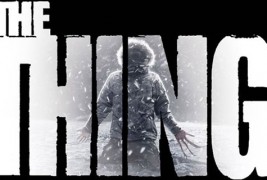 Director Matthijs van Heijningen Jr. said that, as a Swede, he was always fascinated with what happened to the Norwegian team we learn about in John Carpenter’s 1982 classic THE THING.  So, twenty-nine years after that film came out and now holds elite status amongst horror fans, we’re treated to Heijningen’s prequel of the same name.

A good friend of mine used the term “premake” when she gave me a brief summary of this flick earlier this week. It’s a fitting label for a movie that shows us what happens to the Norwegian team but also does it in a way that smacks of a remake.

Much like the ’82 version, we see the flubbed blood test and subsequent alien chaos, the never ending dim hallways and ominous closed doors, and there’s no arguing the resemblance between this version’s Braxton Carter (played by Joel Edgerton) and the original’s legendary R.J. MacReady (played by Kurt Russell).

Yet, there are enough glaring differences to easily proclaim the 1982 version a far superior film.

In this film, the discovery of an alien craft in Antarctica is an opportunity for a team of Americans and a team of Norwegians to get together and inevitably discover that not everything – or everyone – is as it seems.  Mary Elizabeth Winsted plays paleontologist Kate Lloyd, who jumps at the chance to join this exciting expedition.  Edgerton’s character, Carter, is a helicopter pilot who quickly teams with Kate when an unearthed alien life form bursts from its ice block prison.  This alien is able to mimic and replicate any living organism it contacts.  When scientists start going down one by one, it’s a battle for survival on the most desolate continent in the world.

I thoroughly enjoyed the first half of this film – the buildup is well done, the plot is solid, and there are even a few good scares.  However, as the death toll skyrockets, so does the use of CGI.  What makes Carpenter’s version so amazing are the legendary practical effects created by a genius prodigy named Rob Bottin.  Bottin created some of the best visual effects and most terrifying images ever captured on film.

This prelude of a film does a solid job tying into the ’82 version.  I particularly enjoyed seeing the origins of the axe jammed in the doorway and how the hell those two faces got melded together and turned to a burnt corpse in Carpenter’s version.  Oh, and make sure to stay after the first credits roll.

Overall, THE THING (2011) is an entertaining film that I would recommend, although it certainly doesn’t trump THE THING (1982). It adequately fills us in on some of the original’s mysteries while offering some amusing, over-the-top CGI effects.