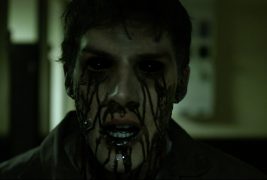 In the mood for some easy, greasy, sleazy fun? Then check out Peelers, the sophomore — and sometimes sophomoric — directorial effort of Seve Schelenz (Skew). It’s available on demand starting March 28 through Uncork’d Entertainment.

Highbrow horror this is not. But if you forgive it its warts, you’ll find lots to like here.

Peelers is set in a strip club run by widowed mom Blue Jean (Wren Walker). Her son, Logan (Madison J. Loos), is a miscreant whose occasional run-ins with the law are more nuisance than nefarious. And this is another of those nights where the cops show up looking for Logan.

It’s a notable night for other reasons. It’s the club’s swan song, seeing as how Blue Jean has signed over the place, located in a small coal-mining town, to a greedy developer they’ve nicknamed Chromagnum (Al Dales). The staff and customers are in a celebratory mood, not just to say farewell to the club but because the place has become an everyone-knows-your-name hangout. Even strippers Baby (Nikki Walin), Frankie (Momona Komagata) and the ultra-pregnant Licorice (Kirsty Peters) are seen more as family than flesh (though trust me, there’s lots of flesh on display).

You also have a slowly simmering thang going on between Blue Jean and bouncer Remy (Caz Odin Darko), a wisecracking bartender in Tony (Cameron Dent) and assorted other characters who add sparkle and, eventually, splatter to the scene.

Splatter you say? Well, consider the four Mexican miners who enter the club. They’re in a celebratory mood, too, but moreso for their discovery. While chipping away for coal, one of them strikes a vein of what they think is a foul-smelling oil. They’re covered in the stuff — and already counting their millions — when they sit down for a round of drinks. Before you can say “Tequilla!,” they’re vomiting a mix of blood and oil and turning into zombie-esque creatures who go on a killing rampage.

Now here’s where things get interesting. Blue Jean — and do NOT call her BJ — is a former ballplayer whose skill with a bat becomes clear when Tony succumbs to a zombie and, of course, comes back to life as one of the oil-oozing walkers. Blue Jean goes all Negan-like on Tony as the battle rages. Problem is, the dead don’t stay dead for long. What to do?

This is where Blue Jean, now wearing her “Road Kill” baseball cap, offers a theory: Oil and water don’t mix. In a hilarious scene, the theory is put to the test when our pregnant stripper’s water breaks … all … over … a … zombie. The poor thing disintegrates.

As battle lines are drawn, all the subplots come into focus, from Blue Jean and Remy, to Logan and mom, to pregnant stripper and childbirth, to Chromagnum and toxic oil. It’s a credit to screenwriter Lisa DeVita that the stories somehow make sense.

Well, mostly. Peelers isn’t exactly like an onion. If you peel away the layers looking for something deep, you might walk away disappointed. There’s nothing deep about a rude, crude, crude oil spookfest.

But this flick IS a good time. The effects are better than a shoestring budget should allow. The music is moody, the lighting and camera angles set the right tone, and director Schelenz manages to convey a kind of grindhouse feel from start to finish. He also coaxes performances that are adequate to good. Walker, as Blue Jean, is particularly effective as the kick-ass female lead a movie like this needs to succeed.

And DeVita’s aforementioned script delivers the right mix of pithy dialogue and one-liners. To wit: When Logan drives over a zombie, he turns to his mom and says, “Looks like I struck oil!”

One other thing worth noting is the ending. Don’t bail when the credits begin to roll. The answer to a motorcycle mystery lies just ahead.

So there you have it. This is an appealing Peelers, worthy of the adoring audiences and awards it received at several film festivals. Consider keeping your own eyes peeled for an upcoming on-demand view. 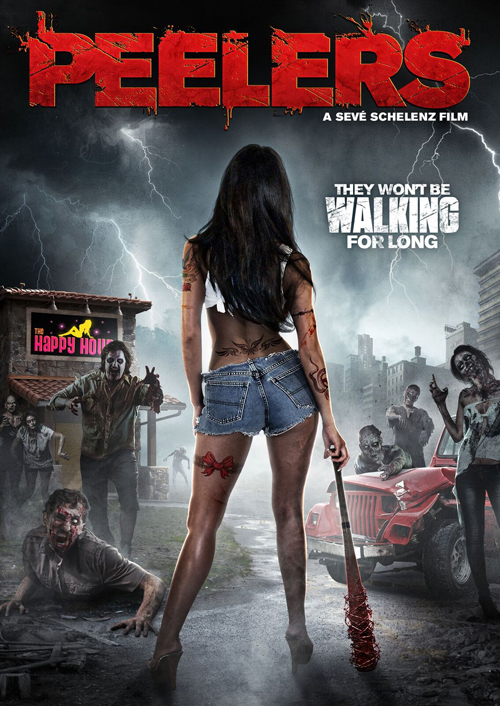