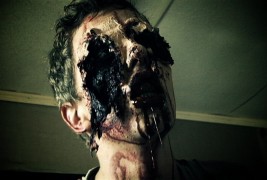 I have a confession to make. When A Plague So Pleasant crossed my desk as a potential review item, I chose it for entirely selfish reasons. You see, I am teetering on that uneasy precipice between “completely tired of zombies” and “aching to see something new done with them.” The idea of zombies as a routine part of society, segregated and following certain rules, seems like the last bastion of zombie story that could be interesting. And so of course I jumped on the chance to review this movie.

But, I’m getting ahead of myself.

A Plague So Pleasant, directed by Benjamin Roberds and Jordan Reyes, is an intimate post-apocalypse story. It introduces us to a world one year after the zombie apocalypse has come and gone, and in that time we’ve learned some important things about the undead. Among them – and most important – is the realization that the zombies are, by nature, peaceful. They will only attack if provoked. However, once provoked, they will swarm and behave…well, as you would expect zombies to behave.

So once this is discovered, the zombie survival strategies come to an end and the undead are instead shepherded into reserves, where they shamble about peacefully.

Against this backdrop, we meet a small cast of core characters.

There’s the main character, Clay, played by David Chandler, his MPDG sister, Mia (Eva Boehnke) who gets all the best lines despite having little screen-time, and Todd (Maxwell Moody), Clay’s emotionally unstable roommate.

The core action of the film begins with Todd lamenting his chances with Mia, who has turned down his advances out of loyalty to her dead (now undead) boyfriend. Clay decides to put a stop to it by eliminating this undead love connection, which ends about as badly as you might expect.

There are many things that this film does so, so well. It presents a world where something utterly uncanny has become mundane, with characters taking the undead in their stride – later to their detriment. It creates characters that are simultaneously sympathetic and immensely despicable, driving home the theme that humans are the worst part of any zombie apocalypse. It makes some interesting visual choices as well, particularly the selective use of color. And I found the ending quite satisfying from both a story and thematic level.

Where the film struggles is the bloated second act, which trades the thoughtful voice-over and philosophical considerations for a more out-and-out survival story. There are some good moments of action, but there are also places where the special effects – a bit over-the-top and not perfectly implemented at times – damaged my willing suspension of disbelief.

And more than that, by this point of the film, I had no reason whatsoever to root for Clay, and I couldn’t quite tell if his character was meant to be as creepy and unlikeable as he frequently is. One scene in particular, involving a little girl, was cringe-worthy in a way that could have been brilliant if I were positive it was supposed to make me squirm.

But I’m willing to overlook so many of this movie’s flaws because it raises so many interesting questions. I love the idea of zombies replacing death, as described in the voice-over: “Nobody dies anymore. They just get up and wander around forever.” And, later, “At least in the old-fashioned cemeteries the tombstones stayed where you left them. Now the zombie reserves hold our lost loved ones.”

So for thoughtful ideas and some top-notch moments of screenwriting, I commend A Plague So Pleasant. It’s not precisely a horror movie, but I don’t think it was ever meant to be one. A bit like Gut, this is a philosophical and even metafictional look at horror, and when it works, it works very well. 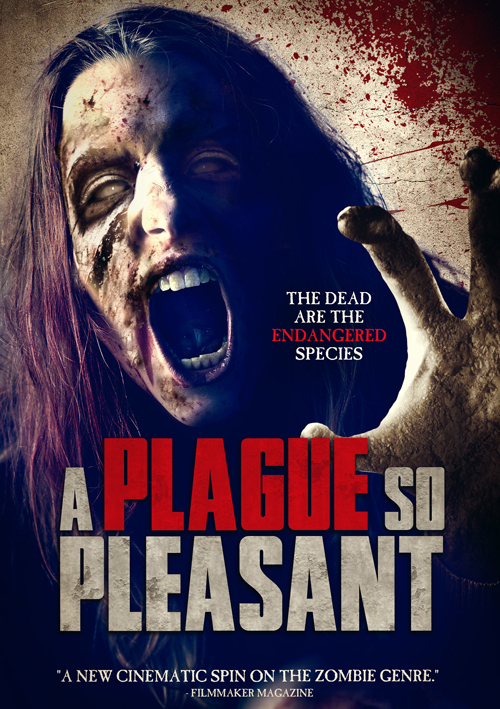