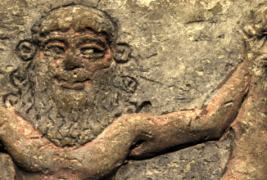 I remember in the early ‘70s when the Good Doctor was barely an intern. Pop Mality took me downtown to one of the local theaters (this being the fondly remembered days before mall multiplexes took over) to see a peculiar film called The Legend of Boggy Creek. It was an odd low-budget flick that used a semi-documentary style to look at the stories of a man-like monster haunting the swampy backwoods near Fouke, Arkansas. The movie made a huge impact on me (the creature’s cry was hair-raising) and actually went on to become a huge success. The Boggy Creek Beast was no script-writer creation; it was based on many eyewitness reports.

It was the first of many movies I’ve seen on the subject of mystery hominids, a subject that continues to fascinate me. They range from the ridiculously abysmal (The Curse of Bigfoot, The Capture of Bigfoot) to well-done and intriguing (Hammer’s Abominable Snowman of the Himalayas was a great one) and hit all points in between. Quality documentaries on the subject of Bigfoot and other wildmen are few and far between, so when I got the chance to see this very contemporary look at the phenomenon, I jumped on it like a dog on a juicy bone.

I’m happy to report that Sasquatch Among the Wildmen—this brief but packed documentary—is well worth a look. So much so that even a lot of confirmed Sasquatch skeptics can watch this and feel it was time well spent. Apparently, director Darcy Weir has done a previous doc on the subject of Bigfoot, which I will have to track down and see.

Bigfoot/wildmen documentaries can go down a variety of paths. First, there are “storyteller” and “recreation” films that feature lots of spoken reports from witnesses and staged recreations of Bigfoot encounters, often with little outside confirmation of events. Then you get the “Great White Hunter” documentaries with a lot of big, bearded guys blundering around in night vision scenes yelling “What was that?” Those you see clogging up reality TV. Some look at the Bigfoot phenomenon from a paranormal or supernatural angle, which is an intriguing take that should not be easily dismissed, but which wind up being highly speculative at best. Then there are hard science documentaries that look at the wildmen strictly as undiscovered species of animal. Sasquatch Among the Wildmen firmly falls into this last notch.

The scientific approach used here is admirably rigid. In the first five minutes, we are introduced to Dr. Jeff Meldrum from the University of Idaho, who is the most respected investigator of Bigfoot in the world right now. When the soft-spoken and unsensational Dr. Meldrum painstakingly describes the foot morphology of primates and how it relates to the many mysterious hominid casts in his possession, it’s about the furthest you can possibly get from a crackpot tossing out wild theories in Youtube videos. Meldrum’s presence gives this documentary instant credibility. 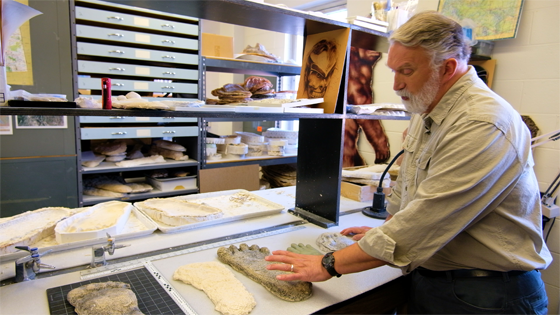 Another great thing about Sasquatch Among the Wildmen is that it lives up to its title…it takes a look at man-beast sightings around the world, not just the American and Canadian locations that have been done to death. The Chinese Yeren, the Russo-Mongolian Almas, the Middle Eastern Dev and several other variants are looked at. The nitpicker in me wishes they would have mentioned something about the “rock apes” of Vietnam that many American servicemen saw during the war there, as well as the Australian Yowie. The truth is, there are so many hominids being seen all over the world that it would take hours to get to them all.

Even better, the documentary mentions the important differences in these creatures. One of the worst traits of many who write about cryptid creatures is how they are all lumped together under one name. The Chinese Yeren or the Sumatran Orang Pendek become “Bigfoot”, despite the fact that they are very different from the lumbering giants of the Pacific Northwest. The Orang Pendek tops out at about four and a half feet tall, which doesn’t sound much like Bigfoot, yet lazy journalists describe the creature just that way. The same thing happens with lake and ocean monsters…a creature spotted in a Russian lake becomes “The Loch Ness Monster” because it’s easy for lazy people to use that name instead of the one the locals use.

This approach does NOT happen here. The beasts are given their proper names and unique characteristics. For example, the Almas is described as being more man-like than the more apish Sasquatch. It may possibly be a relict population of Neanderthals or other primitive human offshoots. I’m glad the makers of the documentary took this more painstaking but accurate approach…it helps to raise this above many other takes on the subject.

Sasquatch Among the Wildmen also is not afraid to include skeptical opinions. Many witnesses of the Yeren are asked about the Chinese wildman, but one of China’s foremost anthropologists is quite dismissive of the reports. He believes the witnesses are misidentifying gibbons or other known species of ape. It’s hard to imagine this would be the case in every instance, but it could certainly be true in some cases. In another segment, a couple of famous YouTube videos are easily disposed of as obvious fakes. This gives the documentary a lot more believability on the whole. It’s the opposite of the infamous early ‘70s “documentary” The Legend of Bigfoot by Ivan Marx, where the “authentic footage” was obviously people running around the woods in a suit.

There’s also some new video footage of hominids that I haven’t seen before. Most documentary clips are the same ones such as the Patterson/Gimlin footage that have been making the rounds for years, but this program is really up to date and has very recent clips. One sequence of some Iraqis filming a “Dev” in a cave is startling because it shows the “eyeshine” of the hairy creature…something human beings don’t have. It also seems to grimace showing some teeth. The rest of the clip is pretty blurry, which seems to be a prerequisite for man-beast footage, but this particular segment is unique enough to really grab your interest and it also focuses on one of the least-known hominids, the Dev of the Middle East. Is the footage “real”? That’s really up to each person to decide. 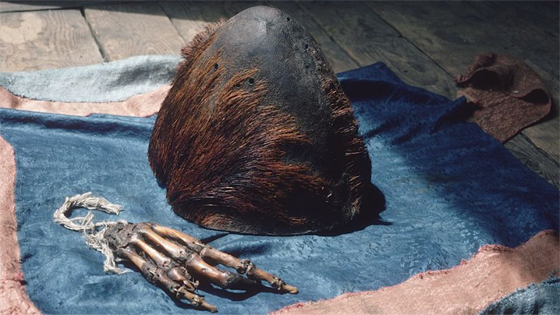 While the first half of Sasquatch Among the Wildmen looks at worldwide variants of the creature, the second half returns us to the more familiar stomping grounds of North America. Several more scientific aspects of Bigfoot are looked at, including the existence of “nests” in very remote areas and analysis of the cryptid’s howls, wails and other noises. A Sasquatch convention is visited and the opinions of experts like Shane Corson and David Ellis are sought. Not a lot of time is spent looking at the actual convention itself, but the attendees don’t seem to be especially strange and the event is well attended.

Some time is spent with members of a group called The Olympia Project, who scour the forests of the Pacific Northwest in search of Sasquatch evidence. There’s a lot of excitement when they venture into an extremely remote and isolated area of the Olympia National Forest and find a large amount of what look like Bigfoot “nests”…circular constructions of brush created by something large. A couple of experienced forest rangers admit they’ve not seen anything quite like it. Dr. Meldrum is called in to examine the nests as well and very careful measurements are taken. Could the “nests” be just what they claim…or is something else responsible? As is usual in most documentaries about the unknown, no firm conclusion is reached, but when Meldrum, the rangers and the Olympia Project members are excitedly shown examining and talking about the nests, it’s hard to not to feel their enthusiasm.

Another aspect of Bigfoot that’s looked at is the numerous sound recordings taken in connection with the cryptid. For this part of the documentary, “bioacoustics” expert David Ellis is interviewed. Bioacoustics studies the sounds made by animals and other living things. Ellis uses advanced equipment to look at some of the howls, growls, hoots and snorts that are attributed to Bigfoot and see how they match up to known animals. Coyotes, bears and cougars are compared to the unknown racket and are pretty quickly eliminated as contenders.

They also look at the phenomenon of “wood knocking” and “rock clacking” associated with Sasquatch and his kin. Ellis and an associate are shown in a forest at night making their own noises and getting some kind of response from the dark. The knocks and clacks are kind of dicey because who knows if it’s not some joker out in the woods having some fun? The actual growls are more convincing, and Ellis finds that some of the Bigfoot roars are very close in tone to the kind of grunt made by wild baboons…of which there are not many in the Pacific Northwest.

Up to this point, Sasquatch Among the Wildmen has been a pretty fast-moving and entertaining documentary. But right after Ellis’ segment, everything abruptly comes to a halt. It’s almost like the makers ran out of money and pulled the plug. And that’s really the difference between what was a good documentary and what could have been a GREAT documentary. This feature runs for about an hour and 15 minutes and that’s barely enough time to even skim the surface of this subject, especially when you are talking about wildmen across the world. If this would have been two hours, it could have maybe been the best documentary ever on this subject. As it is, I still recommend it for those interested in the topic of mysterious man-beasts. This feature will make even the skeptical think more deeply about what could be traipsing around the forests and mountains of the world. 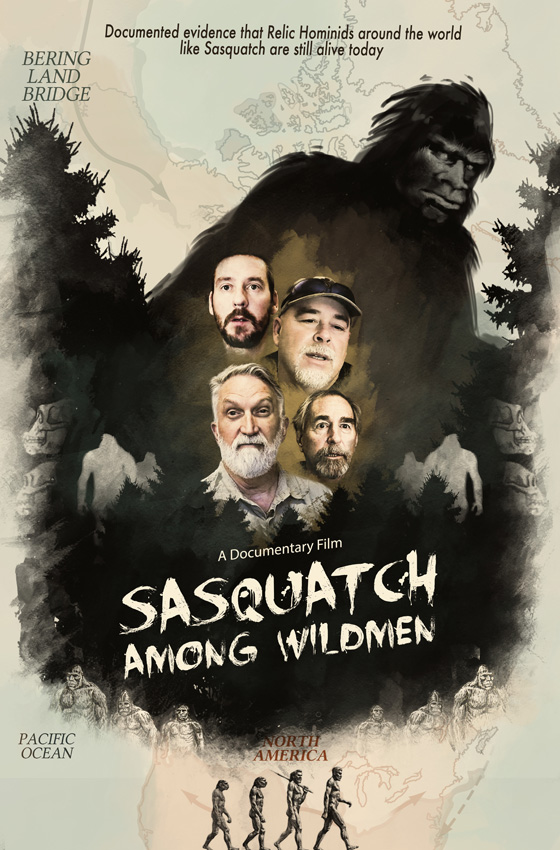