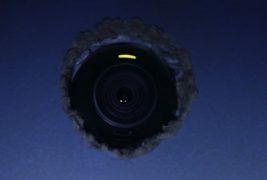 We are introduced to Jane, the central character of Torment, as she sits on her sofa intently watching the opening sequence from Romero’s Night of the Living Dead. Her husband John comes home from work. When he asks what she’s doing, she tells him, “It’s so beautiful. So relentlessly sad.”

That last sentence is a rather apt description of the latest film by Jason Figgis. Like his prior release, Don’t You Recognise Me? (2015), the themes of revenge and the effects of senseless, brutal violence are front and center. However, this time around Figgis imbues the film with such overarching sadness that it affects the viewer in a quite different and deeper way.

The film opens with the implosion of three huge tower-like structures set to the tune of Gilleathain McLean and Ross Morris’s dour soundtrack. It is inviting to think that the towers represent the three characters who are the only living souls who populate this movie. Each of them has been leveled by events out of their control, and Torment examines the aftershocks.

Jack (Bill Fellows) winds down from a busy day. He has a glass of wine, a warm telephone conversation with his girlfriend, and reads himself to sleep. He wakes up buried alive in a makeshift coffin with a built-in camera watching. He also finds himself the subject of a bizarre interrogation. His unseen captor rails that only “the truth” will afford him a chance of survival. Figgis ping-pongs between this story and that of John and Jane, a couple devastated by the rape and murder of their young daughter.

The most fascinating aspect of Torment is how it makes John and (especially) Jane’s suffering so much more potent than that of the man buried alive who is fighting for his life. Scenes showing Jane (soulfully played by Cora Fenton), so severely damaged by guilt and self-hatred, brutalizing herself are especially harrowing. John (a solid Bryan Murray) keeps soldiering on, trying not to lose his wife completely to her demons. However, when we see Jane speaking consolingly to her lost child or moaning outside her bedroom door it is clear that he is losing ground.

The man-in-the-box story plays as more of a conventional horror trope. Accompanied by a menacing low frequency soundtrack drone, the camera nervously darts from close-ups of Jack’s eyes to the camera lens representing his captor, to head shots of Jack as he tries to cope with his perilous situation. Bill Fellows does a believable job as the victim, at turns pitiful, enraged, or vicious in response to his tormentor. Figgis clearly wants to ratchet up the intensity in these scenes. But strange to say, I felt the tension ease every time the action switched to his ordeal. My fear for John and Jane was stronger than my anxiety over what might happen to Jack.

When we return to John and Jane the camera stays static for the hard-to-watch scenes. There is no buildup of tension needed because as the camera calmly observes Jane taking a razor to her scalp or slapping herself silly, there is no release. I think this is intentional.

Most viewers will quickly intuit that there has to be a connection between the two stories, and they are right. But I don’t want to go to Spoiler Town in this review. You will have to see for yourself how the pieces fit together. I will say this much: Jane experiences a dark epiphany that leaves her with the understanding that nothing exists that can heal her wounds. In this way Torment goes beyond Don’t You Recognise Me. After Jane has realized that revenge won’t relieve her suffering the film cuts to what I think of as its real horror moment. John sits holding Jane in his arms as she writhes and screams through a fit of abject grief. Again, the camera makes us watch and, although it is about two minutes of screen time, it feels much longer. Eventually the scene ends, but it does not resolve. Jane has learned something but it takes her to an unbearably bleak reality that, for her, sadly appears to be never ending.

You can probably tell that going to see Torment may not be a great choice for a first date. Its subject is difficult, and Figgis discards the roller coaster ride aspects of the horror genre in favor of tracking the downward trajectory of his main character. Still, this movie is worth seeing. Jane may be a lost soul, but the filmmakers make us feel her loss.

Ultimately, Torment’s unique achievement may be that it is at its scariest when it is not acting like a horror film.