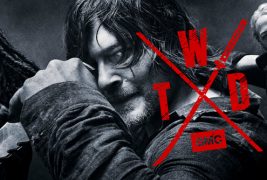 If you’re at least my age and you were around for the golden era of the American sitcom, then you’re familiar with the following scenario:

A hit show based on a family dynamic starts to lose steam as the child actors grow out of their roles. At this point, the all-knowing and wise producers step in and attempt to save the show by adding in a new, even cuter child character or two, and the train rolls on…almost always into a wall, but still.

Remember Andy, the unnecessary new baby of the Keaton family on Family Ties? How about Sam, the firecracker son of Mr. Drummond’s new squeeze on season six of Different Strokes? Who could forget homeless cutie Luke Bower (Leonardo DiCaprio) whom the Seavers brought home like a new pet for what ended up being the final season of Growing Pains?

The addition of these characters signified the death knell for their respective shows–never the cause, but rather a symptom of a show needing a nice comfy spot to lie down and die. The list is long, and the existential sitcom doom these saccharine-sweet one-liner-vomiting specters portend is undeniable.

And that’s where we latch this car to The Walking Dead—horror television’s all-time ratings champion and AMC’s flagship property of the past decade. The character of Judith Grimes, lost hero Rick Grimes’s cute, precocious daughter who was introduced last season for the first time in non-baby form is here to lead us across the Great Beyond. Cailey Fleming does a fine job portraying Judith, but according to Jason’s rules of TV, The Walking Dead is on that aforementioned train and the wall is nigh.

Skip ahead to avoid SPOILERS.

The tenth season of The Walking Dead begins after the Whisperers—a group of survivors that wear the skins of the dead to be able to roam freely among them—had murdered several of our heroes and put their heads on spikes along an arbitrary border. They’ve been warned by the Whisperers never to cross this border. Some reluctantly obey while others, like Carol (Melissa McBride), can barely contain her homicidal rage at Alpha (Samantha Morton), the leader of the Whisperers.

Our heroes are harboring wounds related to the ongoing feud with the Whispers, whether they be mental or physical. Carol is addicted to speed and she’s estranged from her husband Ezekiel (Khary Payton). They’re both mourning the death of their adopted son, Henry at the hands of the Whisperers. Ezekiel is secretly dying of thyroid cancer and the man who treats him, Siddiq (Avi Nash), suffers from severe PTSD as a result of having witnessed the Whisperers slaughter his friends and neighbors. Meanwhile, a mysterious epidemic is rampaging its way through Alexandria’s unsuspecting citizens leaving Siddiq to rely on newcomer Dante (Juan Javier Cardenas) to help carry the burden of treating the sick.

We’re told that our heroes can’t take out the Whisperers because Alpha has threatened to unleash a giant walker horde on them should they try. We’ll get back to that later. In the meantime, Aaron (Ross Marquad) tries a different strategy—winning the hearts and minds of the Whisperers starting with Gamma (Thora Birch) whom he finds wounded along their shared border and offers help. She also happens to share a complicated past with Alpha, naturally.

Fan favorite Negan (Jeffrey Dean Morgan)—the show’s previous bad guy—who’s in the midst of a face-turn, to use pro wrestling parlance, escapes Alexandria and gets captured by Beta (Ryan Hurst), Alpha’s incredibly large and incredibly insecure right-hand man. Soon, Negan swears his allegiance to the Whisperers, but we won’t know until February whether it’s part of a ruse on his way to true face status or if he’s still a heel’s heel. 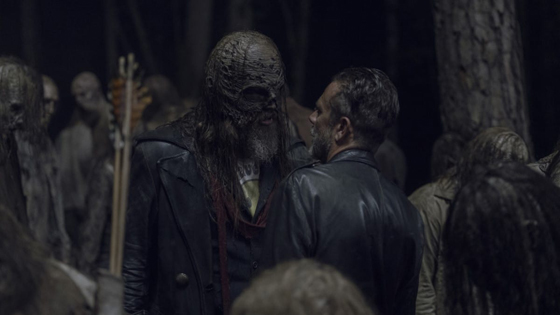 And finally, Alpha’s estranged and thought-to-be dead daughter Lydia (Cassady McClincy) manages to mostly stay out of sight and out of mind at Alexandria. That is, until Carol seemingly uses her to reveal to the rest of the Whisperers that Alpha lied about having killed Lydia—part of a weird, not-very-well-developed cult angle. As a result, Lydia bolts Alexandria and we won’t know her fate until February, either.

As the midseason finale comes rumbling down the tracks, we find out that Alpha has unleashed a mole into Alexandria–Dante, Siddiq’s medical assistant! Once he’s been made, Dante kills Siddiq tipping off an inevitable do-or-die showdown with the Whisperers.

Enter a deus ex machina by the name of Virgil (Kevin Carroll) who, it turns out, lives on a fortified naval base a short distance from our heroes and after they promise to help him get there, Virgil promises to reciprocate with a large favor of his own. Perhaps weapons capable of taking out a huge herd of walkers?

And speaking of huge walker herds, the midseason finale concludes when Carol—out searching for both “the herd” and Lydia—sees Alpha and runs after her into a huge underground cave…and the hidden walker herd, dun dun dun!

For a few seasons now, The Walking Dead has settled into an entertaining yet frustrating echo of what it once was. So, rather than wasting any time waxing nostalgic about the good old days, here are the pros and cons of this season as we sit at the halfway point:

The show’s overarching egregious sin is that it has long abandoned any sense of internal logic. Nearly all the things I find odious about The Walking Dead these days can be directly attributed to this.

For example, in Alpha we have another unintimidating, underwhelming antagonist whose threat to our heroes is nonsensically overstated and whose effectiveness relies on our protagonists acquiescing to her demands in ways that disintegrate several seasons of their own careful characterization. Moreover, Alpha’s power is derived from her threat to unleash a giant horde of walkers—a conundrum we’ve seen our heroes overcome multiple times in multiple ways throughout the previous nine-seasons of this series.

Abandoning its own rules has become a necessity at this point just to make individual episodes play. The show’s stuck between the comic book source material—where some things only work on the page (like the entire concept of the Whisperers)—and its own divergent cinematic material. The result has seemingly left the writers with heroes that are too powerful, experienced, and self-assured to come up with compelling enough and believable enough sources of antagonism for them to battle. So over the past few seasons, sometimes Carol is a pacifist and sometimes she’s a stone-cold killer. It’s a lot like when Superman’s creator Jerry Siegel made up Kryptonite—a green rock that weakens Supes but also, and more importantly, a contrivance bestowing the bad guys with a chance to make things tough for Superman. Or as I like to call it: plot. Even so, buttressing Alpha’s power with such low-hanging conceptual fruit as the threat of “thousands of walkers” feels pretty hackneyed.

One thing this season is doing well is remembering that real life doesn’t stop during the zombie apocalypse—something that was a series strength early on but has been mostly abandoned since then. People get cancer. They get divorced. They get depressed. These things always suck, but they suck even worse with zombies. Spending time focusing on these issues allows the writers more headroom to develop a bad guy’s level of antagonism before that antagonism reaches the absurd levels of, say, Negan and the Saviors or Alpha and her plot-servicing “cult.”

Another compelling thread is the budding relationship between Daryl and Connie (Lauren Ridloff), a deaf survivor who was taken in by Hilltop. The nature of their relationship isn’t clear yet, and it’s mostly been inconsequential to the plot at large, but the performances of Reedus and Ridloff respectively have been a small pleasure this season. 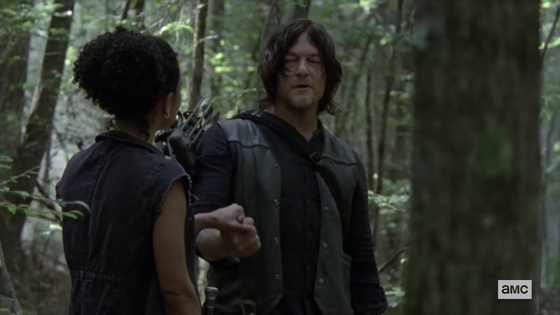 So far, season 10 of The Walking Dead has been a bit understated in scope compared to last season and the result has been a stronger, more focused narrative. While it’s not a huge improvement—some episodes are still barely watchable—any improvement at this stage of the game is both rare and welcome. All aboard!