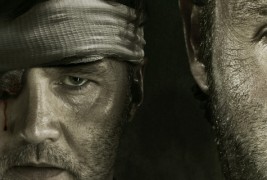 The second half of The Walking Dead Season 3 on AMC is television that’s firing on all cylinders and, for this reviewer at least, that comes as a bit of a relief.  As I wrote at the hiatus, the first half of the season seemed to forget to allow its characters any space to breathe and instead decided to bleed out action-oriented plot at a lethal pace but with little regard for any sort of substantive depth.  As such, the show became less engaging.  It appears that whether or not the writing staff had planned it, the first half of the season was a set up for all the compelling drama the post-hiatus group of episodes provides:  The aftermath of those earlier events and the tough choices it presents our survivors.

Prior to the season hiatus, we watched our survivors attempt an extraction mission.  Rick (Andrew Lincoln), Daryl (Norman Reedus), Michonne (Danai Gurira), and Oscar left the confines of their prison base and snuck into Woodbury intending to rescue Glenn (Steven Yeun) and Maggie (Laurne Cohan) who had been taken captive by Merle (Michael Rooker) and held by the Governor (David Morrissey).  While the rescue was a success and the Governor was wounded (by Michonne), Oscar lost his life and Daryl was captured, setting up a tense reunion with his brother Merle.

The second half of the season continues in the immediate aftermath of the action-packed assault on Woodbury.  Rick and Maggie return to the prison intending to sneak back into Woodbury and rescue Daryl.  They succeed but they also rescue Merle in the process which presents Daryl with a dilemma: Return to the prison with his rescuers or take his chances out in the open with Merle who isn’t welcome by the others.  Daryl refuses to abandon his brother again and the two of them set off on their own.

Meanwhile, at Woodbury the Governor begins to show glimpses of his true self – the sociopathic monster he kept hidden from Andrea (Laurie Holden) and the others.  Andrea begins to suspect that things may not be as they seem, but decides to initiate a plan to set things straight between the two groups nonetheless.

Rick continues to struggle with hallucinations that began plaguing him after Lori’s death and to make matters worse, the Governor orchestrates an assault on the prison which raises the stakes exponentially.  An apparently loony-tunes Rick, who had been wandering around outside the prison finds himself surrounded by zombies and is saved by none other than the Brothers Dixon, Merle and Daryl.  This brings Merle back into the fold and sets up oodles of smarmy redneck shenanigans.

Soon Rick and the Governor meet in person to ostensibly negotiate peace between the two communities.   The Governor’s take-it-or-leave-it proposition is a trade: If Rick gives him Michonne, the Governor and his Woodbury soldiers will leave the prison alone.  Rick leaves the meeting conflicted and suspicious and back at the prison he seeks the council of others, Hershel (Scott Wilson) in particular.

In Woodbury Andrea realizes the Governor won’t make peace with Rick regardless of whether or not he gives up Michonne.  And after Andrea’s assassination attempt is thwarted by the Governor’s assistant, Milton (Dallas Roberts), she escapes once again.  However, just as she approaches the prison, the Governor, who had been tracking Andrea, abducts her and imprisons her in an abandoned building.

Rick, fearing for his children, reluctantly decides to turn over Michonne to the Governor and he enlists Merle to assist him.  But as Merle predicts, Rick has a last-minute change of heart.  Merle captures Michonne anyway and makes his way toward the agreed upon meeting spot where Michonne will be handed over without Rick.  Along the way, Merle and Michonne do some revelatory confessing and Merle sets her free.  He proceeds to the meeting spot alone where he gets shitfaced on some whisky, lures zombies out into the open by blasting Motorhead on the car stereo, then opens fire on the Governor’s henchmen and eventually on the Governor himself (continued after the pic).

While Merle’s busy completing a character arc that will leave you dizzy, back at the prison Rick finally cedes control of the group.  They’ll now make decisions democratically and the first vote is this:  Will they leave the prison or will they stay and fight?  The answer to that question sets up an emotional season finale that’s relatively restrained but well worth the path we take to get there.

While the front end of Season 3 sometimes devolved into an ‘eighties action series along the lines of The A-Team, the back half of the season seems to have regained its footing telling stories with some depth by further developing a large ensemble of characters and taking advantage of the show’s outstanding writing staff and talented cast.  The yard stick doesn’t move forward very far with regard to pure plot, but this season’s second half is an exercise in sophisticated character-focused storytelling.

I’m looking forward to the time when I’ll be able to write a review of this show without having to regurgitate some version of the following:  The existence of zombies is barely enough to sustain an 80-minute movie, let alone a years-long television series.  Zombie mayhem and wildly inaccurate gun fights make my eyes glaze over faster than getting bitten by one of the ravenous horde.  The show’s creative minds seemed to recognize this and have decided to get back to fleshing out drama (pardon the pun) that carries some emotional weight.

The conflicts that really play in this season are human conflicts.  Why is Michonne in danger?  Andrea?  The group?  How about Merle?  Zombies are perhaps the coolest catalyst that exists to create a fertile ground where drama can thrive, but they are nonetheless just the catalyst.  The Governor is our bad guy – our antagonist, not the zombies.  There’s a vocal minority out there who seem to think otherwise and I’ll argue against their position every season.  Promise.

These human conflicts beget more conflicts and before long we’ve been ensnared in a tension web that’s as compelling as TV gets.   The tough choices our heroes make have repercussions that manifest as even more perilous scenarios farther down the road.  And, yes, the entire time this plays out, there are rotting, gnarly zombies shambling about looking for people to eat.

With the focus on characters, the show emphasizes story arcs that are internal to the characters while the external world in which they’re stuck remains a perilous death zone.  For example, Rick begins the season having lost his humanity, his empathy slipping away.  This exodus is soon followed by his sanity.  By the end of Season 3, he’s regained his moral intuition and seems to have transcended the insanity that afflicted him after Lori passed away.  On the other hand, his son Carl (Chandler Riggs) begins the season as an innocent child who reveres his father as a hero, a role model.  He ends the season bitter and cold, resenting his father and in an ironic twist of fate, espousing the moral philosophy of his father’s late nemesis Shane.

One of the more interesting things featured in this last batch of shows is the inclusion of a couple unique, one-off episodes back-to-back.  In Clear, Rick and Carl go back to King County, Georgia and encounter Morgan (Lennie James), the man who saved Rick’s life in the very first episode of the series.  The following episode, Arrow on the Doorpost is structured around the one-on-one meeting between Rick and the Governor inside an abandoned barn while members of each camp contentiously mingle with each other outside before improbably forging bonds.  These episodes mimic the best elements of comic books, the media on which they’re based and serials in the truest sense of the term.  And just as comics tend to jump off the narrative trail for an issue or two as an aside or as a self-contained narrative that’s related to the larger story but only tangentially so, the series successfully does so here.

The second half of Season 3 is good television no matter how you slice it, shoot it, or chop its head off.  It balances action and character much better than the first half of the season does.  The writing features clever subtext that the cast communicates with fantastic performances.  This is the type of drama that I devour like fresh pink flesh, if you will.  So it goes without saying, The Walking Dead Season 3 gets a good grade from me.  What would have been an easy A gets downgraded to an A- for the somewhat haphazard pace and lack of drama exhibited during the first eight episodes.  However, these last eight episodes pull it out of the fire with a great bit of storytelling and still enough gore and gunfire to appease the adolescents living inside us all.