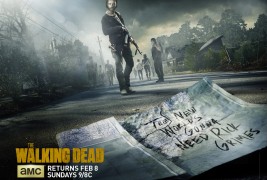 The fifth season of AMC’s hit series The Walking Dead has devoured its last morsel of Sunday night competition until later this year, and just like its previous seasons and its titular rotten ghouls, carnage has been left in its wake, both the emotional variety and the bloody, wet type, too.

These past eight episodes have tread new territory, inverting what had been the show’s overarching struggle for the past four and a half seasons.  As we’ve watched Rick Grimes (Andrew Lincoln) and the rest of our group survive their day-to-day lives post-zombie apocalypse, we’ve seen them struggle and fail to retain some sense of self from the time before the dead began rising up and consuming them.  The biggest threats to our heroes had been other survivors—the ones that had let go of the past and had ethically devolved, doing whatever it takes to survive in this new world.  And try as they did to avoid doing the same, our group slowly descended into that ethical jungle.  The first eight episodes of this season had shown us that descent in no uncertain terms and these past eight episodes state it explicitly: Those who don’t act to protect themselves will die.

While the second half of season five finds Rick and the others inside another fortified sanctuary—this one is called Alexandria—the pendulum rises opposite where it began four and a half years ago.  The biggest threat our group faces is no longer ruthless fellow survivors eschewing sympathy in order to live another day, but rather the few people who have survived by virtue of fortunate circumstances, living life inside a walled-off suburban utopia as if the world around them hasn’t been devoured by armies of shambling corpses.  They’re soft and naïve and THAT’S what’s now truly dangerous.

Let’s look at how we got here, Horror Fans, but beware—there are spoilers ahead….

The post-hiatus story begins in the grief-fatigued aftermath of Beth’s (Emily Kinney) death.  Having lost Bob (Lawrence Gilliard Jr.) and Beth over the course of last Fall’s eight episodes, we’re kicked in the gut before we can get back to our feet as Tyreese (Chad L. Coleman) gets bitten by a walker and eventually succumbs to the wound in what ends up being a heart-wrenching second-half season premier.  The group decides to continue on to Washington D.C., despite the fact that Eugene (Josh McDermitt) had lied about the existence of a potential cure there, figuring it’s likely among the best areas for survival, nonetheless.

Rick and the others are at rock-bottom, physically exhausted, and yet tough as old leather.  They’re forced to travel on foot, fending off hordes of walkers, wild dogs, not to mention desperate hunger and thirst.  Then they happen upon a case of bottled water seemingly left for them in the middle of the road with a friendly note attached to it—they’re being watched!  And, for now, they won’t drink the water.

In the face of such dire circumstances, fissures begin to appear in some individuals and thus the group itself begins showing some tiny stress fractures.  Foremost among these is Rick’s abiding by a survive-at-all-costs approach no matter what, while Michonne (Danai Gurira) begins expressing a desire to settle down somewhere and make it home.  The other members of the group subscribe to one or the other of these two sentiments to varying degrees. 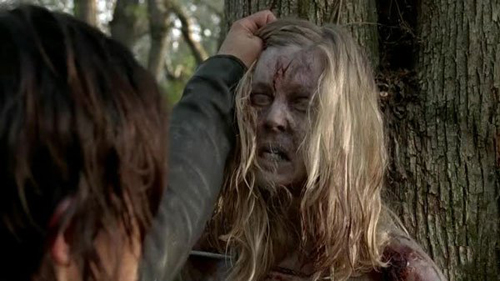 Just when it would appear things couldn’t get much worse for our heroes, a raging thunderstorm forces them to ride out a night inside an old barn.  As the storm swallows the sky and a twister rages toward them through the torrential rain, a herd of walkers also converges on the barn and besieges the group throughout the night.  The next morning, the group finds itself intact, the tornado having obliterated the walkers and everything else, sans the barn.

While surveying the storm’s aftermath, Sasha (Sonequa Martin-Green) and Maggie (Lauren Cohan) are approached by a man named Aaron (Ross Marquand)—the man that had gifted them the water—who tells them that he’s a recruiter for the Alexandria Safe Zone.  Rick, trusting no one, knocks out Aaron and ties him up.  And really, after Woodbury and Terminus, who can blame Rick for getting a little punchy with the ol’ zip-ties?

And this is where the aforementioned fissures come back into play.  Rick wants nothing to do with Alexandria, while Michonne and Glenn (Steven Yeun) are chomping at the bit to give it a shot.  Rick reluctantly agrees to check it out provided they take some extra precautions getting there.  And after a harrowing trip, Aaron, Rick and the rest of the group arrive at Alexandria—a suburban paradise full of playing children, grilling neighbors, dog-walkers and everything else our heroes had thought they’d lost for good.

Alexandria is run by Deanna (Tovah Feldshuh), a former Washington politician.  She debriefs everyone, individually recording their conversations on video.  It’s clear that at least ostensibly, Rick and the others had been spied on for quite some time and their survival skills were something Deanna badly wanted to bring into Alexandria.  She eventually assigns everyone a job.  Rick and Michonne are hired as constables, for example, and while Rick, Carol (Melissa McBride), and Daryl (Norman Reedus) remain deeply suspicious of everything in their new idyllic digs, taking tactical precautions to prepare for the worst, Michonne, Glenn, and Maggie approach things more earnestly.

And then there are the Alexandria town folk….

When Rick takes advantage of the opportunity to clean himself up, he meets Jessie (Alexandra Breckenridge), a cute young blonde who cuts hair.  There’s immediately a spark between them, but Jessie’s married to Pete (Corey Brill), the town surgeon with whom she has a son, Sam (Major Dodson).  And making matters worse, it appears that Pete isn’t just the town surgeon, but also the town drunk.

Meanwhile, Glenn goes on a supply run with Deanna’s son Aiden (Daniel Bonjour) outside the confines of Alexandria.  Aiden is like a post-apocalyptic frat boy and his lack of experience and his arrogance immediately prove dangerous to everybody as he nearly gets Tara (Alanna Masterson) killed.  Afterward, back inside Alexandria, Glenn and Aiden get into a fight over it and that night Rick decides that if these people can’t or won’t help protect themselves, his group will take over. 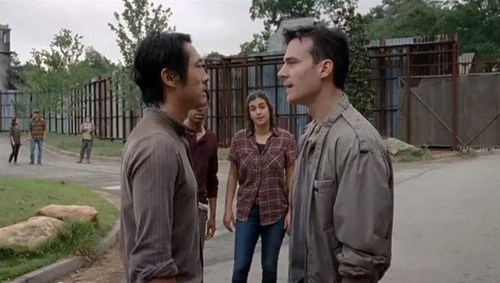 It’s not long before we’re shown several examples of Alexandria residents making more horrible decisions that are huge liabilities to their own safety and it all boils over on another supply run with Glenn and Aiden.  This time Aiden’s poor decisions do get people killed during a confrontation with walkers inside a warehouse.  The sequence is as disturbing a set-piece as we’ve seen on this series and one that will make you think twice every time you go through a revolving door.

Yet, at the same time Daryl and Michonne grow more comfortable with the residents of Alexandria, and Deanna grows leery of the amount of power Rick’s group has usurped.  When Carol discovers that Pete has been beating Jessie and Sam while drunk, the show finds itself on a tragic trajectory and after Carol shares this revelation with Rick, they both rationalize that Pete must die for his transgressions—it’s the way of the new world.

All of these characters’ disparate, shifting perspectives about each other and their prospects for survival converge violently when Rick tries to talk Jessie into leaving Alexandria with him and he’s confronted by Pete.  The confrontation explodes into a fight on Alexandria’s main thoroughfare.  As Rick gains the upper hand and tells Pete that if he ever touches Jessie or Sam again, he’ll kill him, Deanna orders Rick to stand down and proclaims him dangerous.  As Rick erupts in exasperation, telling them all that they’ve grown too complacent and weak, he’s knocked unconscious by Michonne, cracking those aforementioned fissures wide open.

What follows is a truly exceptional hour-and-a-half season finale wherein we’re introduced to a new enemy and an old friend, and all the while there are serious dangers abound. If Rick and the others are to persevere and keep Alexandria safe, first they must reconcile with each other. Will they? Can they? You’ll have to watch and find out, Horror Fans!

Once again, The Walking Dead boasts above average writing and exceptional performances from its cast—Steven Yeun in particular is fantastic throughout this arc.  The first three post-hiatus episodes are daring and potent.  The devastating emotional toll wrought by the second-half season premier is undeniable.  And the way in which the writers realistically portray the difficulty our group has in re-assimilating into society, taking cues from the real world experiences our soldiers have had when they return home from Iraq and Afghanistan, is an effective stroke of political zeitgeist.

And again, the writers have successfully inverted the show’s source of antagonism—from the threat of lawless marauders to the threatening weaknesses of placated incompetents—and they do it in a way that’s easy to digest. That’s an impressive series-long arc to resolve without losing some viewers along the way as it asks us to extend our empathy to protagonists who are making decisions that we found revolting a few seasons ago.

This season’s biggest weakness is an issue that befalls many an adaptation, even one that only occasionally remains faithful to its source material. There are specific plot points that have to be articulated within a given timeframe. Sometimes that timeframe thwarts success by virtue of being too short. By the time Rick and the gang enter Alexandria, we’re already four episodes in.  At that point the show merges its large ensemble of characters, some of whom we’ve only known for a handful of episodes, with several new characters inside Alexandria.  What ends up happening is that several major plot points occur without getting sufficient time to develop and it strains the suspension of disbelief to its limits. 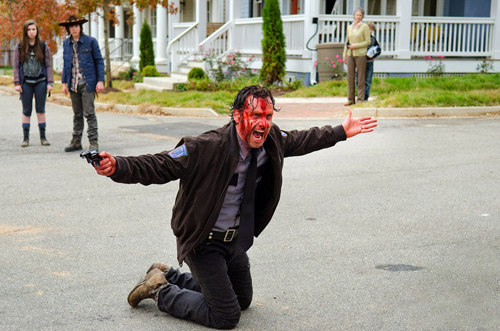 By devoting too little time to this semi-season’s major developments, it’s difficult to empathize with Rick’s romantic feelings for Jessie, or to buy some of the group’s eventual mistrust in Rick, or Daryl’s decision to go unarmed due to his newfound comfort in Alexandria.  These are plot points that should have and could have really soared had they had a long enough runway to take off, but here they just sort of crash and burn.

It’s similar to what can happen when an author writes from an outline—a storytelling conundrum wherein sometimes the inevitability of an event undermines the truth of that event as the hard determinism of an outline strips its characters of their “freewill.” And, of course, this is something many great novelists swear they don’t do. Yet, great storytelling can be accomplished in this situation as evidenced by the success of the vast majority of this series, and much of this season, even. It’s also true that novelists are fantastic liars, so there’s that. Even so, four of these eight episodes are affected by this problem to varying degrees.

…the season finale alone is nearly enough to make up for the four relatively weak episodes that precede it. So despite inconsistent pacing, occasionally heavy-handed plotting, and the resultant weak semi-season arc, The Walking Dead’s outstanding performances, stellar production, and four spectacular individual episodes provide enough overall gratifying TV viewing to bestow season five with a final grade of B+.