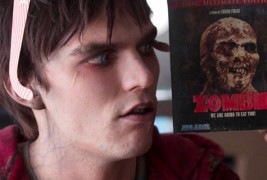 There are a lot of things I hate, but for the purposes of this review, I think I should tell you that I absolutely despise-

Zombies: I wish I meant that in the, “I’ve been pinned down in this cabin for three days by the bastards and can’t take it anymore” sense, but really, I’m just sick of them.  Every time we turn around, some dumbass is serving up Romero Rules™ and brain-eating in a post-apocalyptic wasteland like it’s the most original horror story this side of the Bible.  You’ll note none of these auteurs bother to change anything about the formula: the zombies are always cannibals, always mindless, and always get put down with a shot to the head.  Pages upon pages of this shit continue to be published.  A few years ago, I bought my wife a zombie-themed cookbook for her birthday[1] and took it as a sign that as a culture we were probably reaching the end of our zombie craze.  I mean, once you’ve eaten a horror icon in cupcake form, what more is there?  In the event of an actual zombie apocalypse, such naiveté will surely damn me, because this bullshit keeps shambling forth from our presses and studios and webpages.  And spare me your, “Well you see, old chap, it’s a commentary on mindless consumerism” masturbatory critical posturing.  At this point, the zombie genre is mindless consumerism—which may actually make it mimetically brilliant.  I’m not sure, but I’ll leave that to the masturbating critics to dispute, because right now I want to tell you about how much I hate-

Shakespearean Rip-Offs:  When Leonard Bernstein chose to recast Romeo & Juliet as a 1950’s gang war in West Side Story, there was something brilliant in that.  Using one of William Shakespeare’s most famous plays to reflect on contemporary violence and racial prejudice made both stories seem more immediate.  Of course, now that any lazy shitwad of a director who doesn’t want to think up his own plot can just mine Shakespeare for instant sophistication, the tactic’s grown a little stale.  Please spare me your contemporary teen comedies that crib from Twelfth Night, your vampires vs. werewolves Romeo & Juliet rip-offs, your romantic movies based on The Taming of the Shrew.  The irony, of course, is that none of these stories originally even come from Shakespeare.  Every play the Bard wrote was inspired by something older that he reworked for contemporary audiences, meaning that directors and writers who follow the same tack are trying to beat life into stories that are often well over five hundred years old.  You could say this points to the universal appeal of the stories in question, and you’re just resurrecting them for a new generation, you dewy-eyed artisan you; I say, leave Will in peace and come up with your own fucking story.[2]

So into the swirling midst of this nexus of hatred stumbles Jonathan Levine’s Warm Bodies, a film that recasts Romeo & Juliet as a romantic comedy set in the zombie apocalypse—and crazily, it works.

Based on a novel by Isaac Marion, Warm Bodies takes place in your typical post-zombie wasteland.  The living hide inside a massive compound, only leaving to forage for supplies.  The dead—both relatively fresh “corpses” and decayed, ravenous “bonies”—roam the ruined city outside.  Bonies or not, this is hardly worth your notice, except that Warm Bodies tells the whole story largely from the viewpoint of the zombies, and especially R (Nicholas Hoult), a twenty-something undead guy who lives in an abandoned airport.  Remembering little of his former life, R’s daily routine is what we expect of a zombie—shambling, moaning, and the occasional foray for human flesh.  On one such he encounters Julie (Teresa Palmer), daughter of survivalist commander Grigio (John Malkovich), and decides to shelter her in an abandoned jumbo jet rather than devour her.  But R’s protectiveness towards Julie isn’t quite as innocent as all that.  As it turns out, the soldier R ate immediately before seeing Julie was her boyfriend Perry (Dave Franco).  Zombies, by eating the brains of their victims, get to relive their memories, and R finds himself recognizing and falling in love with Julie as a result.

For a film concept that seems so light-weight, Warm Bodies invests a surprising—and interesting—amount of thought in the inner lives of zombies.  R and his ilk don’t strike us as mindless so much as locked-in—whole, functioning minds stuck in bodies that refuse to obey them.  They can’t dream, can’t remember, don’t sleep, and can only communicate in monosyllables–indeed, only eating living brains allows them any kind of real feeling at all.

Thankfully, there’s no attempt to explain any of this scientifically.  Nor does Levine try to give us any kind of logical explanation for the way in which R and Julie’s developing romance begins to awaken the humanity of the other corpses.[3]  Levine’s willingness to restrain himself works to the movie’s ultimate benefit.  Billed as a comedy, Warm Bodies doesn’t try to push its cleverness on us, concentrating instead on telling a character-based story of surprising poignancy buoyed by generally decent performances.  I would have liked more screen-time for John Malkovich, who like many actors of great range often seems to get sidelined into one-note roles, but he manages to make Grigio a convincingly concerned parent rather than just another survivalist fanatic.

Warm Bodies isn’t Mama.  I could be wrong, but I don’t think you’ll find people praising its emotional depth, strong direction, and amazing acting ten years from now.  You won’t feel yourself on the edge of tears like you did coming out of Del Toro’s masterpiece.[4]  It probably won’t be on anyone’s Best of 2013 list.  But there’s enough that’s new, and well-done, and sincere in Warm Bodies that it doesn’t just come across as another zombie movie, another zombie romantic comedy, or even another zombie Shakespearean romantic comedy.  It may not be a high-test film, but it’s worth a view.  And coming from me, that’s lofty praise indeed.

[1] Some of the stuff in there was pretty damn creative; I especially liked the suggestion of using grains of rice for maggots to make your putrefying skin cupcake look extra realistic.

[2] Anything by Kurosawa is excluded from this; if you haven’t seen Ran, his epic reimagining of King Lear in feudal Japan, you owe it to yourself to put it at the front of your Netflix queue.

[3] The bonies, unfortunately, are shit out of luck. 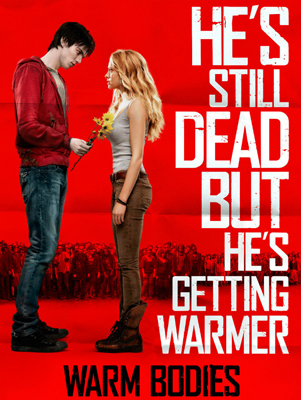