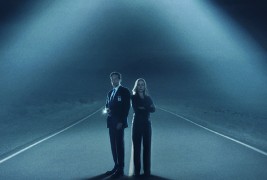 In high school, when The X-Files was in its original run, I had a friend who was a huge conspiracy buff. He was a devout Christian conservative; I was a more-or-less moderate atheist fascinated by Aztec religion. Between his conviction that the Book of Revelation predicted the rise of the New World Order, my troubling obsession with human sacrifice, and our mutual fixation on wilderness survival, discussion over Goldeneye got interesting. I don’t think he was a Mulder & Scully fan–certainly The X-Files didn’t come up much in our conversations about FEMA concentration camps run by the Clinton administration and the late Mesoamerican practice of wearing the flayed skins of slain warriors in honor of Xipe Totec, god of agriculture and goldsmiths. I didn’t have access to The X-Files due to the vagaries of ‘90s cable, so I didn’t watch it until my wife, long-time fan, found it on Netflix.

But we both believed that the government was hiding things from us, educated American citizens just a year away or two from our high school diplomas, people with a right to know. His concept of conspiracy was a political one, a logical next step from his disagreement with Clinton’s policies. Mine was a convenient way to explain the absence of the fantastic in my life. I gave lip-service to skepticism, but at a core level, I was certain that the government had alien bodies in a warehouse somewhere and that asshole bureaucrats who didn’t think I could handle the truth were keeping monsters out of my life. Ogopogo, aliens, chupacabras, sasquatches. . .these filled the faith side of conspiracy that I think Christianity supplied for my friend: the palpably mystic, just out of reach. I suppose it’s not too surprising that a pair of well-behaved but restless teenagers were so willing to see a cover-up by malevolent bureaucrats and authority figures dominating their world.

We both grew out of that. In the ‘90s, conspiracy theories were the stuff of jokes, unless you were uncool enough to take them without a massive dose of irony. The idea of the government hiding the uncanny from citizens had been part of science fiction for generations–the earliest example I can think of is none other than H.P. Lovecraft’s “The Shadow Over Innsmouth,” published in 1931, which mentions a government raid, secret prison camps, and hints at inhuman bodies under covert government study.

Then, 9/11. People stopped laughing. If we hadn’t seen this coming, this conspiracy that ended in the cold-blooded murder of 2,977 people, what else might be happening behind the facade? The X-Files was off the air by that point, and at any rate, Americans were too numb with shock to really care. Never mind that Bush had been warned. Never mind that American policies in the region all but telegraphed the fact that we were smoking dynamite. Two lost wars and an economic crisis later, we elected our first black president, who just so happens to be the son of an African, formerly Muslim father. Because we’re not good with nuance, we suddenly needed a birth certificate, and all the shit we were too cool to believe in the ‘90s became everyday discourse.

Season 10 of The X-Files is all of six episodes, and the writing sucks. Oh, not Mulder and Scully. Gillian Anderson and David Duchovny (my wife has contractually obligated me to tell you that he’s still “yummy”) have the same chemistry that made the original show so enjoyable. But the stories are like bad fan-fiction–not just filler, but belligerently forgettable. Only “Mulder & Scully Meet the Were-Monster,” a fun one-off about a reptilian shapeshifter, contains any of the irony and inventiveness of the original series; the rest of Season 10 wallows in melodrama. “Founder’s Mutation,” a lackluster Monster-of-the-Week about psychic children, contains a corny dream sequence in which Scully fantasizes about what it would have been like to raise the child taken by shadowy forces from her and Mulder. “Home Again” features a mysterious killer who seems to protect the local homeless population, but resolves the story without actually involving the heroes. 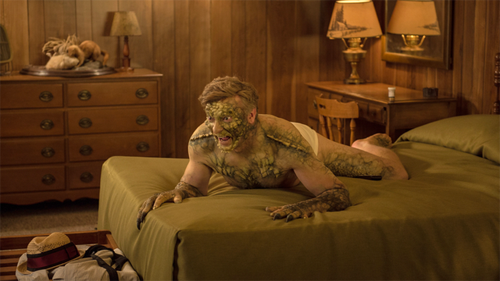 “Babylon” is half-baked. A jihadist bombing brings the duo and two younger versions of themselves to Texas (and it would have been nice if Chris Carter had not contributed another terrorist to the average American viewer’s mental image of Islam). Mulder takes hallucinogens, hoping to be able to speak to the comatose bombing suspect and learn the location of the rest of his cell. The ticking time-bomb bullshit is staler than year-old bread, but Mulder’s gonzo vision quest, which takes him into a Texas honky-tonk, is probably the best sequence in the entire season.

And then there are the two arc episodes, continuing the season’s ongoing alien cover-up metaplot. I admit I was never very interested in this storyline, and that the cliffhanger ending is infuriating, but Carter (who directed both episodes) does something more disconcerting than simply direct bad TV. He makes me question my lifelong belief that fiction is a no-holds-barred sport.

The great failure of American liberalism over the past few decades has been its legalistic insistence on Correct Doctrine. A few good, memorable minority characters who connected with audiences (think Denis O’Hair’s incredibly likable turn as the transgendered Liz Taylor in the last season of American Horror Story)[1] would do far more for tolerance than shrill demands that we check our privilege and feel bad for enjoying ‘50s Westerns or H.P. Lovecraft or The Big Bang Theory. The Editor-In-Chief will reaffirm that I despise the tedious handwringing on cultural appropriation because somebody’s banh mi sandwich was too soggy or some white douchebag wore a sombrero to a frat party, so what I’m about to say is not easy.

I question the responsibility of the story Carter chose for these metaplot episodes, and I’ll try to tell you why in as spoiler-free a way as I can, though take your warning now if you still haven’t seen Season 10.

Mulder and Scully’s first investigation when they rejoin the FBI involves a meeting with Tad O’Malley (Joel McHale), a Glenn Beck-esque webcaster who warns of “a conspiracy of men” behind the supposedly alien menace. These men, as it turns out, managed to slip a gene-manipulating agent into smallpox vaccines that can shut down the immune systems of recipients–i.e., much of the world. Tad, despite Scully’s initial dismissal as a “charming man who says charming bullshit” (or something to that effect), ends up being right all along.

I doubt I need to tell you that refusing to vaccinate your child is one of the most irresponsible things you can do as a parent, but nonetheless, there’s a reason that we’re seeing outbreaks of whooping cough and measles today, in the 21st century.   Yes, it’s fiction, but if you think Americans can tell the difference between reality and charming TV bullshit, you might want to review the results of Super Tuesday.

But there’s something else about Carter’s two metaplot episodes that makes me very uncomfortable in an age when elected officials believe the (secretly foreign, secretly jihadist) President is enacting martial law over Texas or the Muslim Brotherhood are infiltrating the federal government. The original conspiracy theory had nothing to do with crashed spacecraft or shadowy Air Force bunkers. It was a “conspiracy of men” who controlled all the world governments, and false as it was, it fooled people as smart and accomplished as Henry Ford and Charles Lindbergh. The perpetrators, who poisoned wells and controlled nations across history, weren’t men in black, but Jews. 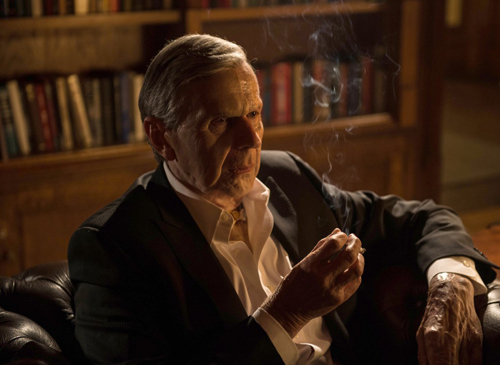 I don’t think Chris Carter is an anti-Semite. Hell, he may have Jewish background for all I know. Bobby Fischer did–which didn’t stop him from admiring Hitler. Still, it’s disquieting how a lot of the old stereotypes about Jews, those archetypal ethnic bogeymen, have been shifted onto Muslims. Instead of big-nosed, shifty-eyed Jews infiltrating our governments in the name of worldwide Communism or Zionism, we now have big-nosed, shifty-eyed Arabs stealing in to spread Sharia law–not that any proponent of these conspiracies can accurately define it. Remember when Michelle Bachman alleged–completely without ground–that Hillary Clinton’s Sunni Muslim aide Huma Abeddin was an operative for the Muslim Brotherhood? And remember when Glenn Beck told us that was something we should consider and look into? And remember how that paranoid webcaster, Tad O’Malley, so capably and earnestly played by Joel McHale, becomes the guy who dependably skeptical Scully comes to believe?

These people–the Becks and Bachmanns and Truthers and Birthers–they’re not heroes, but dangerously ignorant shit-stirrers. The agenda they peddle isn’t truth or freedom, but a conspiracy all its own: the age-old whisper campaign, crystallized in lies and pushed by con artists. The pundit who sees himself as the lone voice against an overarching and malevolent “conspiracy of men” has a an uncomfortable history. I don’t know anything about Chris Carter’s politics and decline to speculate, but really, was there a reason that he had to title these two episodes about this shadowy conspiracy of men, “My Struggle I” and “My Struggle II?”

“My Struggle.” A week ago, a failure of a man who has run four businesses into the ground and would doubtless be living in a cardboard box if he hadn’t been born into unimaginable wealth and blessed with a sociopathic ability to manipulate others, became a major American political party’s front-running contender for the presidency. This would-be Troll-in-Chief, whose pre-adolescent antics must even now be making dictators around the world turn to their populations and say, “You want to vote? Really? You want democracy? Look at America,” tacitly accepted endorsements from the Ku Klux Klan, and has proposed measures that are baldly unconstitutional and directly against the best instincts of a country that prizes humanity, logic, and the uniting of disparate peoples in the name of common liberty.

“My Struggle.” You probably just chose that title for the implied drama, right? A certain Wagnerian sturm und drang? At any rate, Duchovny is Jewish and has even hinted that Mulder is as well, so I’m sure it’s nothing, but why did you choose that title, Chris? Why here? Why now, in this day and age, for your story about “a conspiracy of men?” It’s pretty uninspired (that doesn’t surprise me, given the rest of Season 10’s writing), but just tell me why. Humor me.

Because I just want to know that you weren’t thinking what I’m afraid you might have been thinking, Chris. The neurosis of a student of history, I’m sure, but please–just tell me it was a lazy decision done for money, like the rest of Season 10. Tell me I’m being crazy, taking bathroom graffiti for the writing on the wall. Just put me at ease, because a lot of things are starting to add up in unsettling ways.

“My Struggle.” I don’t speak German, Chris, but wouldn’t the translation for that be Mein Kampf?

[1] And I must admit, it was a pretty good season.