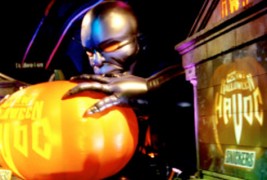 During the last installment of “Chairshots to the Pumpkinhead,” we looked at the highest highs of WCW’s Halloween Havoc. From grueling and intense matches to gimmicks that worked, these Halloween Havoc highs made the product worth viewing. But, just as every piece of Halloween candy turns into righteous mud in the stomach, Halloween Havoc had its fair share of lows. The following items are cellar-dwellers—matches, promos, and ideas that were so bad that they stink out loud even today. These are the lows of Halloween Havoc. You’ve been forewarned.

The Chamber of Horrors Match, 1991

Oh, boy. This one is rough. While it had all the right ingredients (blood, a steel cage, tons of talent), the match came off as a cluttered dud. First of all, if you look close enough, you can see the switch go from north to south a couple of times without anything happening. Normally, this wouldn’t be an issue, except for the fact that in this match, the object was to strap your opponent in the electric chair that was in the center of the ring while another man pulled the switch. Even after WCW staff managed to temporarily fix the funky equipment, the payoff, which saw Cactus Jack accidentally electrocuting his partner Abdullah the Butcher after a very weird belly-to-belly suplex from Rick Steiner, was a silly show of sparking blue lights. It probably didn’t occur to the creative team in 1991 that a mock public execution might not have gone over well with everyone, especially those who paid attention long enough to see Abdullah the Butcher walk away from it all.

Remember how I said 1993 was a bad year? Well, here’s more evidence. For some reason, WCW fell in love with making long vignettes in order to hype their matches. Most if not all were cringeworthy, but the opening to 1993’s Halloween Havoc is especially bad. The plot is as follows: a bunch of kids are out trick-or-treating. Most of the group wants to go back home, eat candy, and watch Halloween Havoc. However, the group’s leader—a chubby Dracula with a lisp—wants to end the night on a scary note. Accordingly, he convinces the other kids to ring the doorbell of a large, spooky mansion. The door is answered by none other than Tony Schiavone, the WCW play-by-play announcer, who on this occasion is underneath heavy make-up and rocking a black smoking jacket. After trying to creep the kids out, little Dracula bops Schiavone a couple times on the nose and tells him that he’s not being scary enough. Now fed up with the little brats, Schiavone goes to a window and slowly rips his skin off in order to reveal that he is not an announcer, but a giant bat with claws and huge fangs. The kids scream and flee. Cut to the beginning of the show. Realizing that everyone had just scene first-rate crapola, Jesse Ventura tries to save the day by claiming that he’s dressed as a Bourbon Street gynecologist. 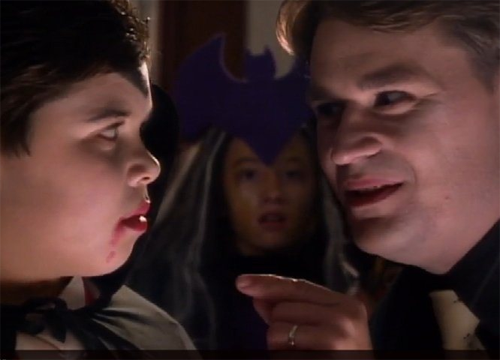 The Rise and Immediate Fall of Van Hammer, 1991

Van Hammer (real name Mark Hildreth) is well-known among wrestling fans for being a giant turd. Despite having a great look, Van Hammer couldn’t wrestle a lick, which probably explains why he’s one of the very few wrestlers to never hold a title, even a title in a nano-sized indie federation. In 1991, WCW was trying to build Van Hammer up as a cool guy rock-and-roller who kicked butt and got the kids excited. Under the nickname “Heavy Metal,” Van Hammer awkwardly banged his head to the ring while trying to look cool with a Flying V looped around his neck instead of his neck and shoulder. Miraculously, Van Hammer even managed to screw up his match with Doug Somers, which is egregious when you realize that the whole point of the match was to make Van Hammer look good by feeding him an opponent who would not even attempt to fight back. Mercifully, the match ended after one minute and thirteen seconds. Van Hammer’s career dragged on for a few more years. In the meantime, WCW ditched the guitar, but still kept on with the whole heavy metal angle even though grunge had already killed off hair metal’s popularity.

The former governor of Minnesota is now mostly known as an arch conspiracy theorist and a blowhard, but not so long ago, Jesse “The Body” Ventura was a color commentator who cut his teeth in both the WWF and WCW. At the 1992 installment of Halloween Havoc, the usually acerbic Ventura went deep into left field during the night’s opening bout between Arn Anderson, Bobby Eaton, and Michael P.S. Hayes on one side and Tom Zenk, Shane Douglas, and Johnny Gunn on the other. The match itself was going great and was notable in that the Philadelphia crowd was solidly behind the older heels (Anderson, Eaton, Hayes), but somehow Ventura manages to derail the whole process by leaning over to Jim Ross (yes, Good ol’ J.R.) and saying that he doesn’t like Shane Douglas because “I’ll bet he’s one of those right-wing Republicans.” The comment essentially leaves Ross with nowhere to go, so even in an election year like 1992, the comment gets dropped. Ventura’s aside isn’t a major goof, but it is weird and it didn’t serve a purpose. Whether or not Shane Douglas is a conservative Republican (if his time in ECW is any indication, then he certainly isn’t overly righteous when it comes to swearing), he was a bland babyface (see: good guy) at the time who never let out a breath about politics. Whatever the reason, Ventura’s commentary certainly wasn’t helping Douglas’s case. 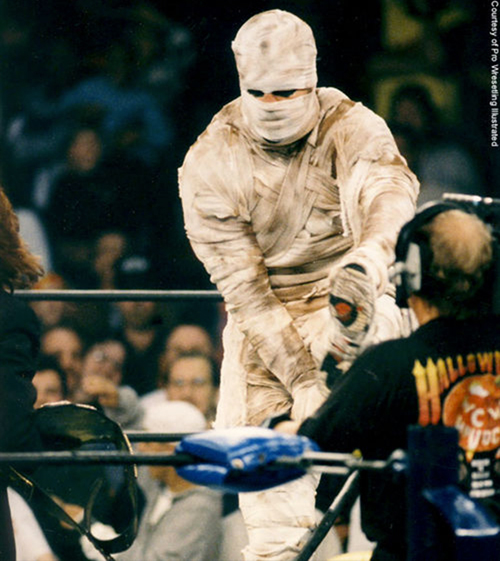 If you tried to make the world’s worst wrestling pay-per-view, I’m still not convinced that you would’ve come up with something this bad. In 1995, Hulk Hogan was the new king of WCW. Since joining a year earlier, Hogan had won the WCW World Heavyweight Championship in what was his very first match with the company. By Halloween Havoc, Hogan had held the belt for well over a year, but his foes were gathering and the fans were starting to boo. Led by Kevin Sullivan, the Dungeon of Doom, a horror-themed stable, claimed that they were out to rid the world of Hulkamania. Unfortunately, not only was no one buying it, but the Dungeon of Doom elicited more guffaws than gasps. Sullivan, who once played a Satanist so convincingly in Florida during the 1980s that audience members would tell him to find Jesus during his matches, was now a cartoonish imp with a bunch of old or otherwise no-name wrestlers behind him. Worst of all, the Dungeon of Doom-Hulk Hogan feud featured a gaggle of cheesy vignettes that included stunningly bad acting. It all culminated at Halloween Havoc, when Hogan, who had taken to wearing all black instead of red and yellow in order to tap into his “dark side,” first beat the Giant (better known today as the Big Show) in a sumo monster truck match that included absolutely no wrestling, then, after thinking that the Giant had fallen to his death from the top of Detroit’s Cobo Hall, Hogan then beat the Giant via disqualification in a standard wrestling match. At the end of the night, another member of the Dungeon of Doom was born when a large chunk of ice thawed, thus revealing the Yeti, which was just a giant wrestler dressed as a mummy. Now free, the Yeti proceeded to apply the world’s weakest bear hug to Hogan. That’s how the show ended—not with a bang or a whisper, but with a loose fart.