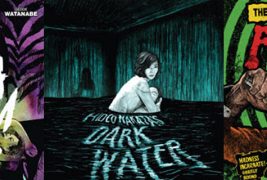 Arrow Video US has revealed their slate of sadistic cinema for October and, as usual, it’s stacked with goodies, not the least of which is a totally bananas, limited edition Herschell Gordon Lewis 17-disc set!

Read on for the details, Horror Fans…. 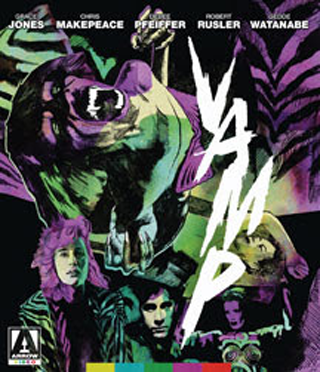 THE FIRST KISS COULD BE YOUR LAST!

Two fraternity pledges head to a seedy part of town to find some entertainment for their college friends but are faced with bloodthirsty vampires! Keith (Chris Makepeace, Meatballs) and AJ (Robert Rusler, A Nightmare on Elm Street 2: Freddy’s Revenge) want to make the right impression at college and so they devise a plan to get them into the best frathouse on campus. They head to the After Dark Club where they want to find a stripper for a party their friends won’t forget, instead they find themselves among vampires led by Kinky Katrina (Grace Jones, A View to a Kill)!

Almost certainly an influence on From Dusk til Dawn, Vamp is superbly designed by many of Grace Jones’ own award-winning collaborators and features stunning effects by four-time Oscar winner Greg Cannom (The Lost Boys, Bram Stoker’s Dracula). Delivering laughs and scares in equal measure, with the added bonus of vampy sex appeal, Vamp is a comedy horror romp with real bite!

– Subtitles for the deaf and hard of hearing 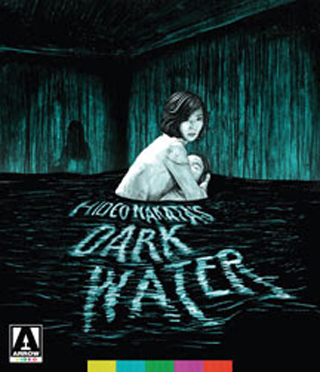 After terrifying audiences worldwide with the blockbuster J-horror classic Ring and its sequel, director Hideo Nakata returned to the genre for Dark Water, another highly atmospheric, and critically acclaimed, tale of the supernatural which took the common theme of the “dead wet girl” to new heights of suspense and drama.

Based upon on a short story by Ring author Koji Suzuki, Dark Water follows Yoshimi, a single mother struggling to win sole custody of her only child, Ikuko. When they move into a new home within a dilapidated and long-forgotten apartment complex, Yoshimi begins to experience startling visions and unexplainable sounds, calling her mental well-being into question, and endangering not only her custody of Ikuko, but perhaps their lives as well.

Beautifully shot by the same cinematographer as Ring and Pulse, and featuring an especially unnerving sound design, Dark Water successfully merges spine-tingling tension with a family’s heart-wrenching emotional struggle, creating one of the very finest and most unsettling contemporary Japanese horror films.

– First pressing only: illustrated collector’s booklet containing new writing by David Kalat, author of J-Horror: The Definitive Guide to The Ring, The Grudge and Beyond, and an examination of the American remake by writer and editor Michael Gingold 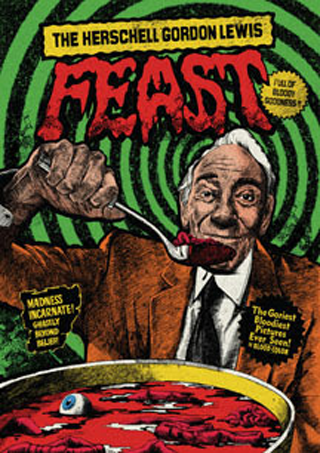 In 1963, director Herschell Gordon Lewis pulled a cow’s tongue out of an actress’ mouth on camera, and in doing so, changed the landscape of horror cinema forever. That sequence was just one of numerous gruesome gags featured in Blood Feast, the film credited as being the world’s first gore movie. It’s no exaggeration to say that the modern gross-out movies of today owe their very existence to the pioneering efforts of H.G. Lewis. But whilst Lewis is most widely celebrated for his blood-and-guts epics (Two Thousand Maniacs!, The Wizard of Gore et al.), there’s more to the prolific director than splatter.

From tales of sordid photographers (Scum of the Earth) to sex robots (How to Make a Doll), from biker girl-gangs (She-Devils on Wheels) to youths-run-amok (Just for the Hell of It), and from psychic witches (Something Weird) to hard liquor-loving hillbillies (Moonshine Mountain), the filmography of H.G. Lewis reads like a veritable wish-list of exploitation movie madness.

Now, for the first time ever, Arrow Video is proud to present fourteen of the Godfather of Gore’s most essential films (including nine Blu-ray world debuts), collected together at last and packed full of eye-popping bonus content. So put your feet up, pour yourself a glass of good ol’ moonshine, and prepare yourself for a feast – H.G. Lewis style!

– Additional 2 bonus Blu-rays featuring 1.33:1 versions of Blood Feast, Scum of the Earth, Color Me Blood Red, A Taste of Blood and The Wizard of Gore [limited editions exclusive]

– Audio Commentary on Scum of the Earth by Friedman

– Hicksploitation: Confidential – visual essay on the history of the American South’s representation in cinema

– Herschell’s Art of Advertising – Lewis shares his expert opinion on the art of selling movies and how to hook an audience.

– Audio Commentary on Something Weird with Lewis and Friedman

– Lewis on Jimmy, the Boy Wonder, his 1966 children’s musical

– Trailers for Color Me Blood Red and Something Weird

– Audio Commentary on The Gruesome Twosome with Lewis

– Audio Commentary on A Taste of Blood with Lewis

– Peaches Christ Flips Her Wig! – the San Francisco performer on The Gruesome Twosome

– Trailers for The Gruesome Twosome and A Taste of Blood

– Audio Commentary on She-Devils on Wheels with Lewis

– The Shocking Truth! – Bob Murawski on his lifelong love for Herschell Gordon Lewis and what he has learned from Lewis’ films

– Audio Commentary on The Wizard of Gore with Lewis

– The Gore The Merrier – an interview with Jeremy Kasten, director of the 2007 Wizard of Gore remake

– The Wizard of Gore Trailer

– Audio Commentary on This Stuff’ll Kill Ya! by camera operator and Lewis biographer Daniel Krogh

– Herschell Spills His Guts – Lewis discusses his career post-The Gore Gore Girls, why he left the film industry and his role as a leading figure in the copywriting industry

– Trailers for This Stuff’ll Kill Ya! and The Gore Gore Girls