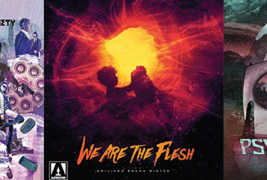 Arrow Video has shared their upcoming Blu-ray/DVD release schedule for January and February and as usual their offerings run the gamut.  First on the list is the Black Society Trilogy, a series of transcendent crime films from Japanese splatter master Takashi Miike.  Next we have We Are the Flesh, a surreal Mexican frightmare that’s been making waves on the festival circuit.  You can watch the trailer here.  And, finally, we have Psychomania, something of a British exploitation classic about Satanists, zombie bikers, and mayhem.

Read the full press release below for all the specs on these upcoming Blu-ray/DVD offerings, Horror Fans….

January’s a great month for fans of Japanese crime cinema as Takashi Miike’s Black Society Trilogy arrives on both Blu-ray and DVD. These stylish and gripping crime films put Miike on the cinematic map and proved he was more than just a specialist in blood and guts. See the films that made Takashi Miike’s name as a master of Japanese crime cinema with this exciting set from Arrow Video. Including Shinjuku Triad Society, Rainy Dog and Ley Lines, in beautiful high definition transfers, the set also contains a host of special features including a brand-new interview with the director himself.

Fresh from recent festival and filmmaker acclaim, We Are the Flesh debuts in the US on DVD and Blu-ray. We Are the Flesh is a Mexican arthouse head-trip which takes you on a nightmarish journey into a post-apocalyptic hell. Outrageous and explicit, it sees a brother and sister taken in by a strange hermit who uses them as he acts out his own depraved fantasies. The longer they stay, the more they find themselves slipping into the darkness, despite their better judgement.

This bizarre slice of Mexican arthouse is one of the most unsettling film experiences you will ever have and an all-out psychedelic head-trip. It details the adventures of a brother and sister who take refuge with a strange hermit in a post-apocalyptic city. As he acts out his dark, depraved fantasies, they find themselves drifting further into the realms of the forbidden.

Last but not least, The United States gave motorcycle-mad cinemagoers Easy Rider, The Wild One and The Wild Angels. The United Kingdom gave them Psychomania, the tale of zombie bikers run amok is southern England, coming to Dual Format DVD + Blu-ray on February 21. The Living Dead are a delinquent biker gang, fond of causing havoc on British roadways and making out in graveyards. Gang leader Tom (Nicky Henson) also has a Satanist for a mother, and when he discovers the secret of immortality, the name of his motley crew takes on a more literal meaning. Psychomania is a wonderfully offbeat gem, outlandish and eccentric in equal measure. 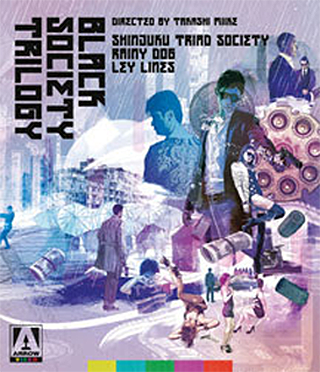 After several years spent working almost exclusively in the direct-to-video world of “V-cinema” in Japan, Takashi Miike announced himself as a world-class filmmaking talent with this trio of thematically-connected, character-centric crime stories about violence, the underworld of Japanese society, families both real and surrogate, and the possibly hopeless task of finding one’s place in the world. His first films made specifically for theatrical release, and his first for a major studio, the “Black Society Trilogy” was the beginning of Miike’s mature career as a filmmaker and they remain among the prolific director’s finest works.

Set in the bustling Kabuki-cho nightlife neighborhood of Tokyo, Shinjuku Triad Society follows a mixed-race cop (Kippei Shiina, Outrage) struggling with private issues while hunting a psychotic criminal (Tomorowo Taguchi, Tetsuo the Iron Man) who traffics in children’s organs. Rainy Dog, shot entirely in Taiwan, is about an exiled yakuza (Dead or Alive’s Show Aikawa) who finds himself saddled with a son he never knew he had and a price on his head after the Chinese gang he works for decides to turn on him. Ley Lines moves from the countryside to the city and back, as three Japanese youths of Chinese descent (including The Raid 2’s Kazuki Kitamura) seek their fortune in Tokyo, only to run afoul of a violent gang boss (Naoto Takenaka, The Happiness of the Katakuris).

Three of the most dramatically moving films created by the director, the “Black Society Trilogy” offers clear proof that Miike’s frequent pigeonholing as a specialist in bloody spectacle is only one aspect of his filmmaking career, and taken as a whole, the films are among the finest works ever to deal with the way violence and brutality can unexpectedly destroy even the most innocent of lives. 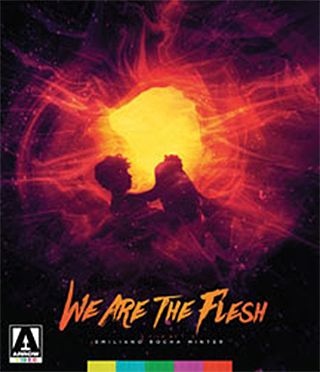 A visionary and bizarre slice of Mexican art house cinema, We Are The Flesh is an extraordinary and unsettling film experience, a sexually charged and nightmarish journey into an otherworldy dimension of carnal desire and excess, as well as a powerful allegory on the corrupting power of human desire.

A young brother and sister, roaming an apocalyptic city, take refuge in the dilapidated lair of a strange hermit. He puts them to work building a bizarre cavernous structure, where he acts out his insane and depraved fantasies. Trapped in this maddening womb-like world under his malign influence, they find themselves sinking into the realms of dark and forbidden behaviour.

Acclaimed by the Oscar-winning Mexican directors of The Revenant and Gravity, and playing to rave reviews and stunned audiences at genre film festivals around the world We Are The Flesh is that rare beast – an intelligent, beautifully-crafted art house film that is also provocative and deeply disturbing.

Mixing the graphic, powerful imagery of Gaspar Noé’s Love and Enter The Void with the surreal, hallucinatory impact of Alejandro Jodorowsky, and taking Mexican arthouse cannibal flick We Are What We Are to the next level, We Are The Flesh is a bizarre, psychedelic head trip, mixing intense, outrageously explicit imagery with a profound allegory on the nature of existence, to make this is an unforgettable, boundary-pushing experience unlike anything you’ve ever seen.

‘The most disturbing horror debut since Hellraiser’ ★★★★ SFX

“I loved this film. It takes over our waking thoughts, like a recurring dream we try to forget, because we are fearful of finding out it may be a memory.” Gravity director Alfonso Cuaron

“We Are the Flesh is a very personal, very powerful film that deeply impressed me.” The Revenant director Alejandro Gonzalez Iñarritu

FIRST PRESSING ONLY: Illustrated collector’s booklet featuring new writing on the film by critic Anton Bitel, and a note from the producer on the film.

PSYCHOMANIA on Blu-ray + DVD  on February 21 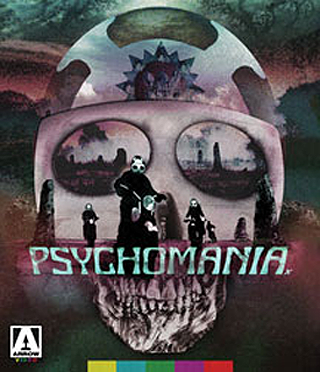 The United States gave motorcycle-mad cinemagoers Easy Rider, The Wild One and The Wild Angels. The United Kingdom gave them Psychomania, the tale of zombie bikers run amok is southern England. The Living Dead are a delinquent biker gang, fond of causing havoc on British roadways and making out in graveyards. Gang leader Tom (Nicky Henson) also has a Satanist for a mother, and when he discovers the secret of immortality, the name of his motley crew takes on a more literal meaning… Directed by Hammer veteran Don Sharp (The Kiss of the Vampire, The Devil-Ship Pirates) and co-starring Beryl Reid (Dr. Phibes Rises Again) and George Sanders (Village of the Damned), Psychomania is a wonderfully offbeat gem, outlandish and eccentric in equal measure.