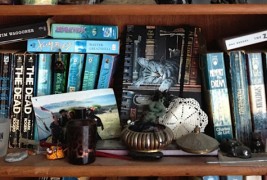 Dana Fredsti on her collection:

My bookshelves are an eclectic mix of books (more or less arranged by genres, authors, and sometimes themes) and stuff.  “Stuff” can range from old dolls to photos, seaglass (LOTS of seaglass) in shells, jars, antique teacups and ashtrays; little cat figurines; knives; hand-made cards from my best friend, a collection of pewter Vikings that my dad collected from the Smithsonian Institute collection…  lots of stuff.  As much as I love books (and the house is filled with them; not only on shelves, but also in stacks under tables and wherever we can fit them), I prefer the aesthetic of books and “stuff” together.

One of my bookshelves is dedicated to children’s books, many from my childhood (like the Space Cat series) and other, newer favorites, like the Harry Potter books.  I have a collection of non-fiction books about gypsies on this shelf too, and some morbid kid’s books.  My Edgar Allen Poe Bobblehead takes a place of pride here.  I won Edgar at Left Coast Crime in 2007 for a best storytelling award.  Live storytelling, point of fact.

Another shelf has all of my esoteric books on magic and the supernatural, lots of books on tarot (from my “I want to be a gypsy tarot reader” phase), plus rocks, crystals, feathers, stuff I’ve collected since I was a kid. I also have a collection of exotic feline whiskers collected while cleaning their enclosures when I worked at www.cathouse-fcc.org.  Go ahead, click on the link!  Best. Place. Ever.

My Barbara Hambly/Charles de Lint, and zombie books have their own shelves, along with my zombie plush, many little cat figurines, and… well… more stuff.  And yet there always seems to be room for more… 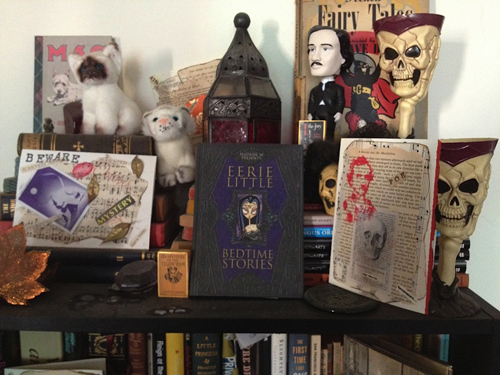 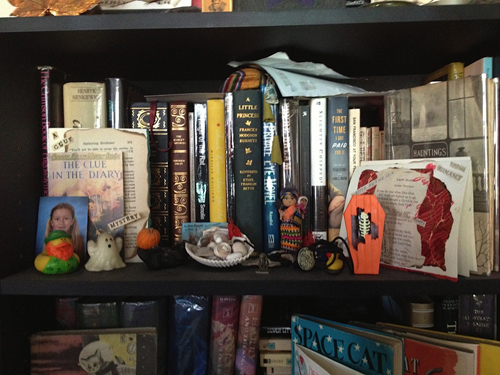 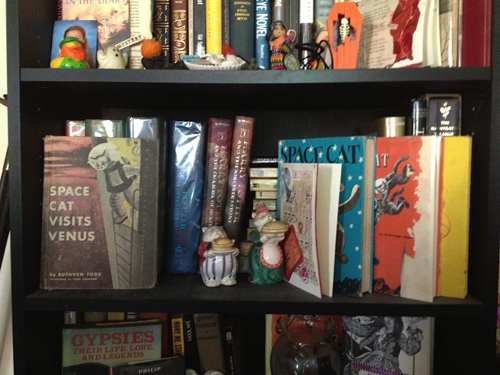 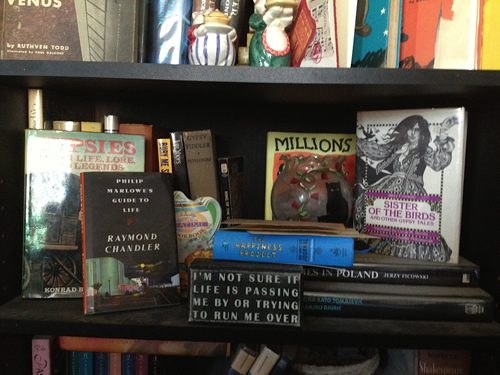 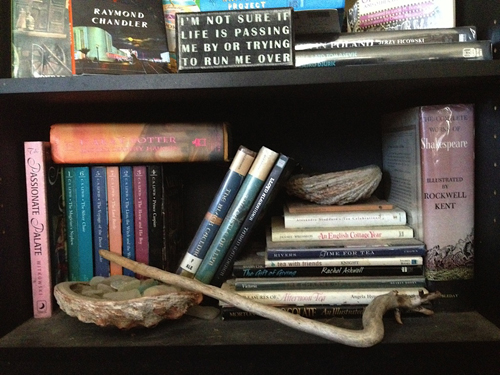 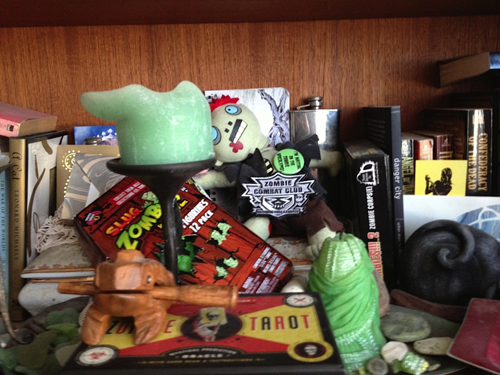 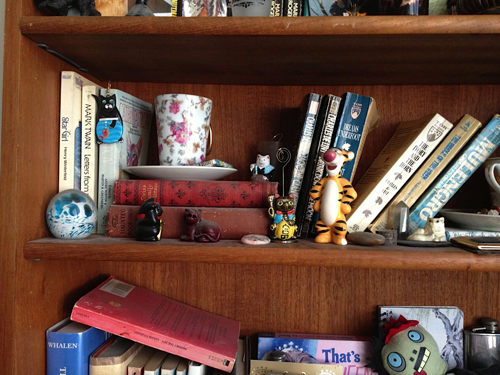 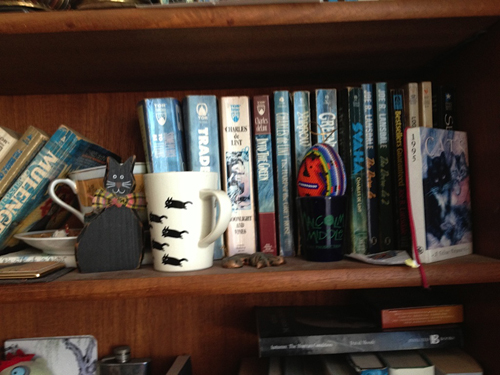 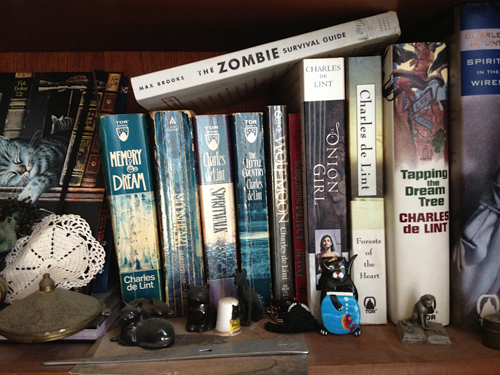 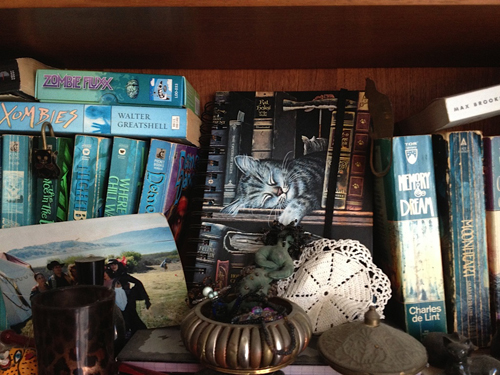 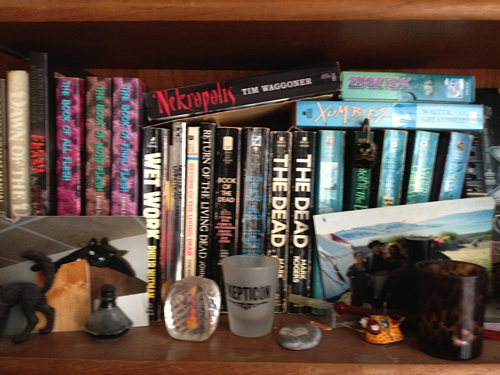 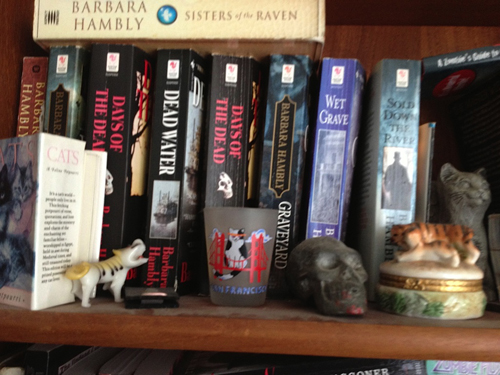 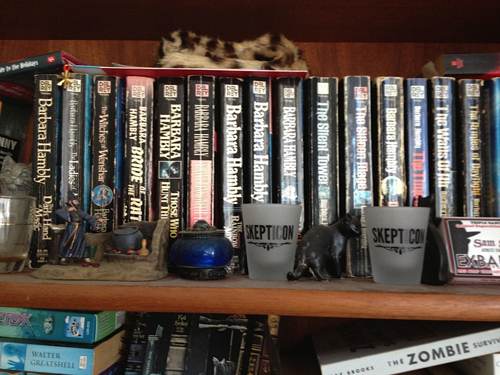 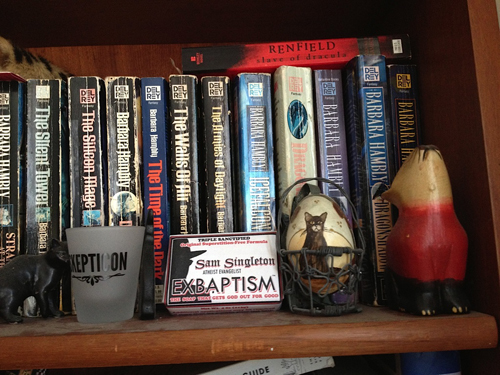 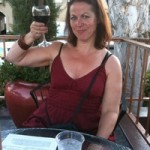 About this author: Dana Fredsti is the author of the zombie books Plague Town: An Ashley Parker Novel, its sequel Plague Nation, and she’s currently hard at work writing Plague World, the final installment of the Ashley Parker series.  She’s an ex B-movie actress with a background in theatrical sword-fighting. Through seven plus years of volunteering at EFBC/FCC (Exotic Feline Breeding Facility/Feline Conservation Center), Dana’s had a full-grown leopard sit on her feet, kissed by tigers, held baby jaguars and had her thumb sucked by an ocelot with nursing issues. She’s addicted to bad movies and any book or film, good or bad, which include zombies. Her other hobbies include surfing (badly), collecting beach glass (obsessively), and wine tasting (happily).