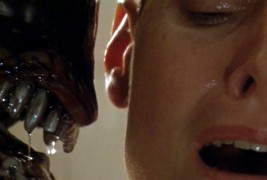 When I was younger I bought the Alien Trilogy, then Alien Resurrection on VHS.  Years later, I bought the Alien Quadrilogy on DVD (as cool as it looked, the box was a total pain the ass to use). Most recently I bought the series again on Bluray, and the case is now awesome.  This is a series of films I adore, and they’re probably among my most re-watched movies, year in and year out.   In this spirit I’m counting down the top 10 moments in my mind.  Beware of spoilers…and my affection for Alien 3.  Note: I am excluding Prometheus, and both (shitty) Alien vs. Predator movies.  While I enjoyed Prometheus when I caught it opening weekend, I just haven’t felt compelled to revisit it.  Whether it will stand the test of time still remains to be seen, though much of my hesitation to re-watch it comes from the belief that it won’t hold up well and I’ll like it less. 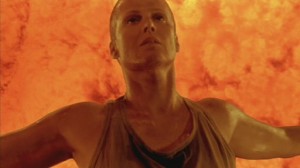 Alien 3 is a very good movie that should have been a dark, epic masterpiece.  Alas, it got all buggered up.  The special edition of the film I find to be amazing showing more of what Fincher was going for, and it ends perfectly.  Ripley sacrifices herself to destroy the creature by falling into the boiling vat.  I prefer her, sans Alien fall, allowing the focus to stay with one of the strongest heroines in the horror genre, if not all of film.

2.  The Space jockey and eggs below – Alien 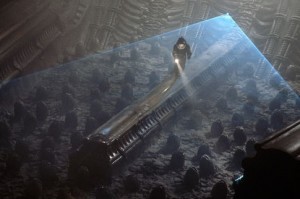 When the original crew finds the ship on LV426 and they enter the massive chamber with the space jockey and the eggs it is an amazing shot.  It has a sense of awe and wonder with a dark foreboding.

When I finally saw this movie, it was well past 1979 (mostly because I was not born yet) and even though I knew it was coming I flinched.  This is an amazing use of practical effects with stellar performances all around. 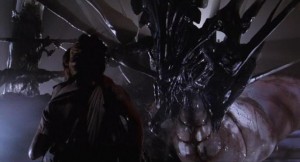 Newt has been kidnapped, the Marines are dead with the exception of a wounded and drugged Hicks, the whole colony is about to explode and Ripley goes to save Newt.  The tension is extreme and no one is guaranteed to survive.  Cameron made a bigger film, while maintaining the tension from the original.

Before the opening credits are over, Newt, Hicks and Bishop are killed leaving all of Ripley’s heroics from Aliens meaningless.  This is the ultimate tone-setter.  We’re entering dark territory here people.  Where Cameron created an action horror hybrid, Fincher brings us to darker, more dramatic territory.    I salute him for this choice.

While I was well aware of the chest-burster earlier in the film, when Ash‘s head pops off I was blown away with a great holy-shit moment.

Torches and knives, these are the only weapons available.  After these creatures wiped out a squad of marines it comes down to this.  Horror and action merge in this clever cat-and-mouse sequence.

8.  The marines enter the lair – Aliens 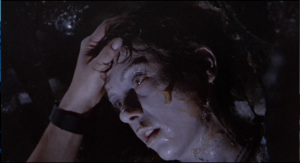 The Marines have found the colony’s residents, and they move beneath the primary heat exchange to get them, but they have to give up their ammo for fear of rupturing the cooling system and causing a thermonuclear explosion; flame units and bad language only.  Cameron keeps the tension tight and it erupts quite literally with a chest-burster before the Aliens converge on the squad. 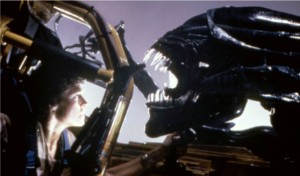 While I could have gone without blowing the Queen out through the air hatch, there is no denying how incredibly bad ass Ripley in the power loader is as she moves toward the Queen.  To me this scene is made even stronger with Ripley’s full backstory as included in the director’s cut of the film.

While Alien Resurrection is an undeniable mess, I respect the choice to try and do something different in this established universe.  I personally feel this follows the tradition set out by the original three directors.  Throughout Jeunet’s vision come a few genuinely great moments, and the underwater escapes tops them off.