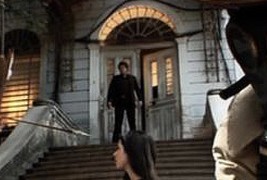 Brazil came late to the horror film, but when it did, its debut offering was worth the wait. Few countries can claim such a schlocky thing of beauty as José Mojica Marins’s 1963 classic At Midnight I’ll Take Your Soul (À Meia-Noite Levarei Sua Alma) as their kickoff, and right before a military coup d’état no less. Since then, Brazil has mostly failed to live up to its first on-screen outing, but has more than made up for it in terms of frightening music (everyone knows Sepultura, but who among us knows about the blasphemies committed by Sarcófago?). Then again, failure never stopped true artists from trying, and Beyond the Grave, which is writer-director Davi de Oliveira Pinheiro’s first feature film, is evidence of the fact that some Brazilians still want to usurp old Coffin Joe.

Sadly, they need to keep trying. While the overall idea behind Beyond the Grave is fascinating (at least what parts of it I can understand), the film fails to pass muster in terms of execution, pacing, and basic entertainment. In total, Beyond the Grave goes about its Western-meets-zombie-meets-zen film all wrong and leaves its audience in a fog thicker than traffic in Rio.

Before putting this cinematic churrasco through a thorough grilling, let’s take a brief moment to look on the bright side. First of all, the Brazilian countryside couldn’t look more disturbing in Beyond the Grave. Pinheiro and cinematographer Melissandro Bittencourt went out of their way to show the chaotic monotony of post-apocalyptic Brazil, and thankfully the film’s storyline excuses their redundant use of the same exteriors and interiors. After all, in a world overrun by zombies and a demonic serial killer with a fondness for gas masks, everything would take on the hue of a sun-scorched highway or a crumbling, hallowed out building with all the decadence of a Salò soiree.

Another well-orchestrated move by the makers of Beyond the Grave was their decision to drag their horrors into the daylight. Speaking personally, daytime scares have always terrified me more. At night, we expect something or somethings to bump, but during the day, we tend to relax under a false sense of security. Disrupt that, and you’ve officially undone any sense of safety, which is what any self-respecting fright film should do. Also, another personal confession: There’s just something about horror that happens in hot countries during the height of summer that makes me queasy. As a viewer, I can’t help but to feel an extra sense of dread watching films like Beyond the Grave, for I know well how much it must stink to fend for your life while nursing a serious case of swamp ass.

Finally, Rafael Tombini should be applauded for his turn as the taciturn police officer protagonist who wades through a zombified Brazil like a black-clad Clint Eastwood with a stigmatism. While the role doesn’t call for much more than quiet confidence, a square jaw, and an air of brooding masculinity, Tombini pulls it off while surrounded by either amateurs or experienced thespians phoning it in. His only competition is Álvaro Rosa Costa, who plays a friendly Mr. Rogers type who just so happens to be lethal with an umbrella.

And now comes the inevitable crash. Despite a few fine performances and an effective setting, Beyond the Grave just can’t surmount its own surrealism. Whether or not it’s intentional, Beyond the Grave is an illogical headtrip that never really bothers to explain itself. For instance, why do some zombies hungrily attack the living, while others are content to just shuffle around them? Or how about explaining why, after just trying to kill him, Indio (played by Marcos Guarani) feels comfortable dressing up in a shirt and tie around Officer (Tombini)? Better yet, why would a shirtless guy all of a sudden feel the need to become dapper right after his boss has bit it and he himself has taken a shot to the neck?

More importantly, what’s the deal with the Dark Rider? Everybody, from the DJ, (voiced by Ian Ramil) who will not shut up about how his dead sister met the Dark Rider, to Officer himself, is searching after the Dark Rider, and yet no one seems capable of saying what the Dark Rider is exactly. In a prelude sequence that clears nothing up and has the timing of a Rupert Pupkin joke, the Dark Rider (played by Adriano Basegio) kills a man during the pre-apocalypse right before he himself is gunned down. Before going under, the Dark Rider spouts off something about infecting the person nearest to him, thus perpetuating the Dark Rider’s existence.

Later, after the world has gone mad with the walking and dripping dead (who matter so little in the film that they’re barely extras), the Dark Rider has become a woman (played by Tatiana Paganella) and she’s after Officer with her elaborate pistol and circle of cronies (which includes some goofball with black fingernails and a flute that deafens people with its suckitude). After killing a young couple (played by Ricardo Seffner and Amanda Lerias) who had previously spent the earlier parts of the film as foils for the grumpy Officer, the Dark Rider then sets her sights on those survivor holdouts who have taken in Officer. Besides Costa’s kindly father figure, there’s a pregnant Adriene (played by Luciana Verch) and a shotgun-happy mook in a Wehrmacht helmet named Ashley (played Leandro Lefa) sharing the dilapidated schoolhouse with Officer. Fortunately, the Dark Rider fails to take them all out and Officer successfully manages to kill the Dark Rider host through some ritual hoodoo that is as corny as Johnny Carson in a turban.

More than its non sequiturs in lieu of a screenplay, Beyond the Grave suffers because it doesn’t get the blood going until halfway through the film. Not just mere gore, mind you; Beyond the Grave can’t even arouse excitement, and therefore horror’s usual heighteners (sex, death, and farm implements) either fall flat or don’t appear at all in this picture. It’s one thing to try and limp by with a vague narrative; it’s another thing completely to do so while also refusing to give the audience something to get interested in. No fear, no formula, no fun. Beyond the Grave is better off buried. 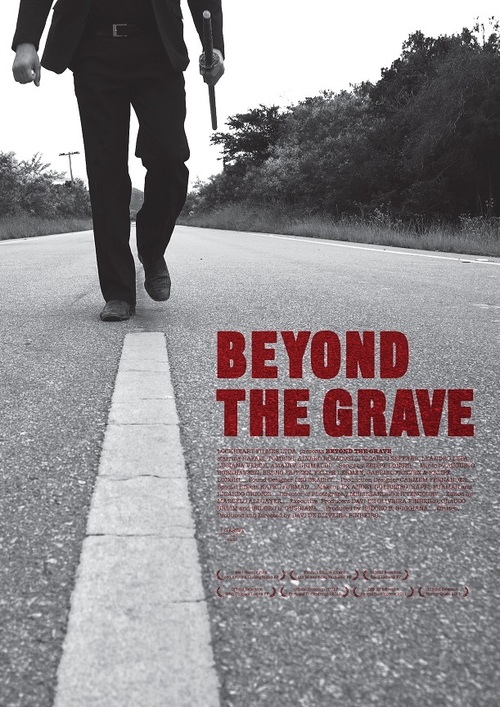 Beyond the Grave, originally released in 2010, is now streaming on Hulu.