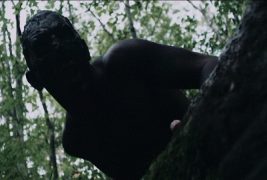 One topic I enjoy covering in my own work is sanity versus insanity. The question of whether any of us are truly sane is one that never fails to keep me searching for the right answer. While we may never really know (nor will there ever really be a ‘right’ answer, in my opinion), it’s interesting to ponder and speculate. Is what we see real? Are those considered insane truly insane, or are they merely open to and accepting of another reality that the rest of us are not?

The film’s blurb is as follows:

“The death of her fiancé leaves Grace abandoned in a harsh mountain wilderness. Struggling against the elements and fighting off starvation, the fragile shell of her sanity begins to crack. Her situation worsens when she notices a dark figure stalking her every step. Through memories of her mother and father, Grace finds a long-forgotten truth about herself. It is this secret, long hidden away, that will either lead her to safety or down a path of horror beyond anything she could comprehend.”

We’re taken on the journey of a young woman by the name of Grace (Juliet Reeves). From the start, it is very much implied that all is not well with her. As a child, she experienced the great trauma (which we are shown) of seeing her father (Lee Perkins) commit suicide and, of course, she carries this into her adulthood despite attempts at what some might call a normal life.

We see Grace traveling with her boyfriend Jim (Jeremy London) for what’s supposed to be a romantic getaway into the Smoky Mountains. While in the car, she has a rather disturbing vision of him. When he asks her what’s wrong, she tries to play it off and ignore it. Upon reaching the cabin, the couple tries to settle in and enjoy their time together. That very evening, he proposes marriage, to which she responds favorably. In that moment, the two seem to be well on their way to a happy, fulfilling life, right?

The following morning, Grace and Jim set out on a hike in the very beautiful mountainous woods. As they venture further away from the cabin, she seems distracted – not fully present. As Jim tries reaching her, telling her how much she means to him, she brushes him off (perhaps she is afraid of old ghosts returning and eventually sabotaging their relationship?). When Jim goes to their supplies, including his hunting rifle, nearby, we hear a gunshot and Jim is shot through the head and instantly killed. Interestingly, it’s never clear whether or not the shot was fired from Jim’s gun (it’s possible) or from somewhere else. And if it was from his own gun, was it accidental or self-inflicted? Again, either is possible and a clear answer is avoided, therefore adding to the mystery of an already intriguing and very twisted plot.

After Jim collapses from the gunshot wound, Grace is understandably devastated and in shock. Her grief lapses her judgment and she buries (or hides?) the body. And of course, being that they are all the way out in the wilderness, no cell phone reception means no calling for help. This is where everything really seems to go downhill.

Up until now, Grace seems to at least be attempting to hold it together. But an injury to her hand becomes horribly infected, and now she also seems to be stalked by a strange, shadowy creature lurking among the brush. As she continues her struggle to survive the unforgiving wilderness, two parts of her personality appear. One could speculate them being the old “angel/devil on the shoulder of the one they are trying to influence”, but if you really want to get psychoanalytical, you could also say that it’s her super-ego versus her id. Either way, it is clear that she is descending into an abyss of madness, not knowing which is reality and what isn’t. And frankly, neither does the person watching the film. Bravo to the writers and filmmakers on accomplishing that one.

While she fights with the advice of her super-ego and id, she finds herself revisiting the gruesome memories of her past. We’re taken on this journey of twisting roads and dead ends as Grace tries to navigate not only the mountains, but also the labyrinth that is her childhood. We are given more of a glimpse of what home-life was for her growing up. But then we also end up asking ourselves the question of whether these memories are even real. And as for the shadowy figure that stalks her? Well, all she knows is that she must kill it in order to survive. And it just might be the key to opening up the truth about everything…

Girl in Woods is a great film. The locations are ideal and the cast is credible. Juliet Reeves’s realistic portrayal of a person struggling to cope with more than one tragedy while struggling to maintain her own sanity on a very dark and dangerous path is impressive. As an actress myself, I know how draining such a role can be and she pulls off a seamless performance. Charisma Carpenter‘s (Buffy the Vampire Slayer, Angel) rather eerie performance as Grace’s mother adds to the film’s creepiness quite nicely. The film is also well-shot, well-edited, and provides an audience with a gripping story-line.

For those of you seeking out a fast-paced, action-filled movie with jump-scares, Girl in Woods may seem a bit slow (and there was a point when I even thought the plot dragged a little, but that didn’t last very long). This movie is for folks who, like me, appreciate a good, extremely dark and twisted psychological journey that keeps you guessing right up until the very end. 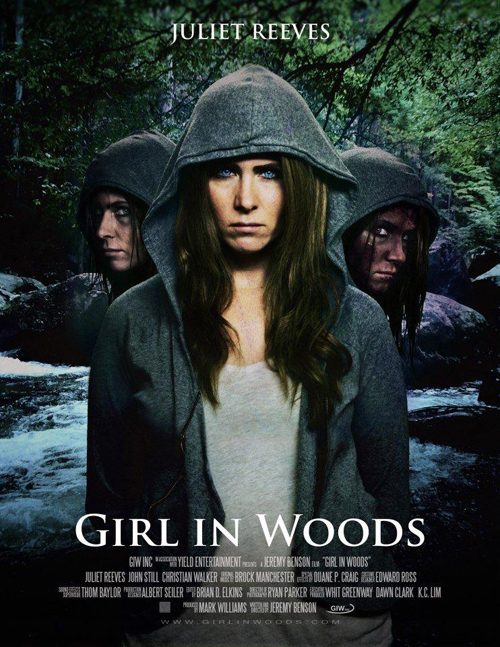 Girl in Woods will be available to rent or own starting June 3rd on Comcast, DirecTV, iTunes, Dish, Amazon Instant, Google Play, Vudu and more.