The season of giving is upon us. The time when we should lookout for those less fortunate than us and be willing to share. To lift one another’s spirits and spread just a little bit of that fabled Christmas Cheer. The Leech, written and directed by Eric Pennycoff, tells the story of how sometimes such acts of giving can go horribly awry.

As Father David (Graham Skipper) leads a sermon in his largely empty church, he also preaches the virtues of giving to one’s fellow man. As he’s closing up for the night, he discovers a man sleeping in one of the pews. Terry (Jeremy Gardner) is a slovenly fellow who attempts to fine-talk his way into sleeping in the church. When that doesn’t work, he hovers around the property making unanswered phone calls to his girlfriend, begging her to pick him up. Witnessing the man’s desperation, David reluctantly follows his own teachings and offers Terry a ride home.

Realizing that Terry seems to be completely homeless, David invites him to stay under his own roof, until Terry can get back on his feet. Despite some friction with personalities, the two seem to get along okay. As the differences between the two men grow wider, David finds himself unable to extricate himself from his act of kindness. Upon the arrival of Terry’s girlfriend Lexi (Taylor Zaudtke), David’s life spirals further out of control, as he descends deeper into chaos and a seemingly inevitable catastrophe.

The Leech is an unnervingly funny dark comedy. Not so much a horror film, it falls into that unclassifiable category of disturbing, perverse, and utterly hilarious. If it were available back in the tape rental days, it would show up in the Weird section. If your store didn’t have a Weird section, then the next best home for it would be the Horror section. Whatever you want to call it, The Leech is a fantastic addition to the Christmas movie watchlist.

The small cast does an impressive job of keeping the film moving. Just as things start to get uncomfortable, the movie ups the ante and plunges even further into the dark depths. Gardner and Zaudtke are outstanding as the wild bohemian couple. Even as they grow progressively debauched, they never become cartoonishly villainous. Their boundary pushing is always just slightly more egregious than before, but it never feels outright aggressive or mean-spirited. In their own twisted way, they almost come across as wholesome.

Pennycoff’s script skillfully eases us into the depths of The Leech’s absurdity one inch at a time. Each action leads naturally to the next, and by the time it becomes clear that the situation is out of control, it’s too far gone to be remedied. We feel as helpless as David as he continually devolves into a nightmare of depravity within his own home.

But far from being a simple story about a pious man pushed to the brink of madness, Pennycoff’s script pulls double-duty in both empathizing and maligning all parties involved. Terry may be a bit of a slob, but he is kindhearted and even offers to provide handyman services on more than one occasion. Lexi is a free-spirit, and a fiery foil to Terry’s goofy stoner vibe, but within her sometimes-crass behavior is a desire to make sure everyone is having a good time. Meanwhile, David continually martyrs himself for the sake of pleasing his guests, rather than setting friendly, yet firm, boundaries.

It raises the question of who really is responsible for David’s misery. While the film never explicitly heads in that philosophical direction, it’s something the viewer can’t help but wonder. Wisely, the film never truly resolves that question.

As The Leech heads into its third act, the plot does take a turn into the somewhat fantastical. It becomes rather murky with regard to how much of what we’re seeing is actually happening, versus how much is being seen through the lens of David’s growing insanity. The turn in style makes sense for the story, however it undermines its own tension. If we can’t tell what’s really happening versus what may or may not be hallucinatory, it becomes difficult to maintain emotional investment in the events unfolding.

Fortunately, the movie doesn’t push too far in that direction and never completely loses itself. However, a little more clarity could have been used in the last quarter or so to keep things better grounded in reality.

Rounding out the cast of characters is Rigo (Rigo Garay), one of the few parishioners of David’s struggling church. Though a smaller and less spectacular role, Garay performs fantastically, nonetheless. As the voice of reason and an observer removed from the growing maelstrom, Rigo witnesses the devolution of David’s psyche and tries to pull him back from the brink.

Will he succeed in bringing David back to his senses? Will David find a way to peaceably resolve his relationship with Terry and Lexi? One might say it would take a Christmas miracle to pull that off.

The Leech is great fun and a welcome addition to the library of holiday horror. Don’t expect a scary movie, as that’s not what it’s going for. Pitch black, dark comedy is what The Leech brings to the table. And it brings enough for everyone to share. 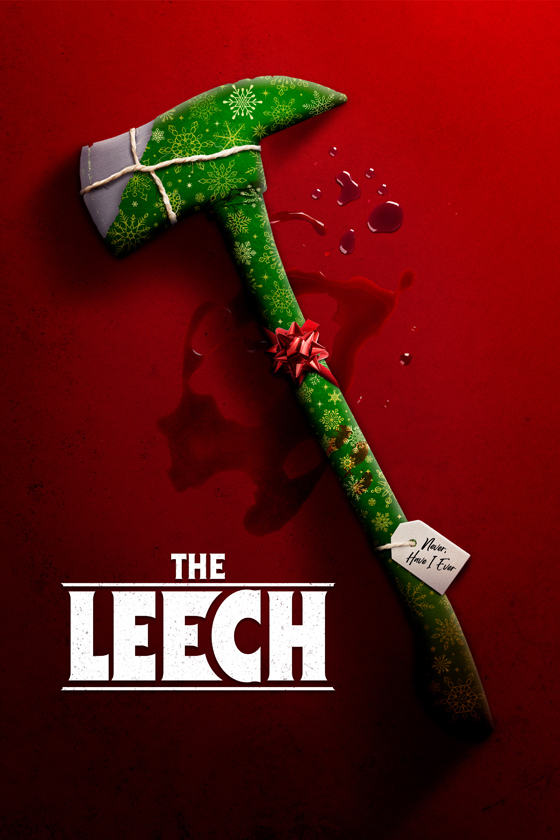 The Leech is currently available on VOD exclusively at Arrow.