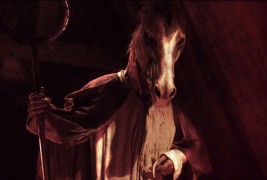 Director Romain Basset’s 2014 film Horsehead takes the viewer on a surreal journey into a young woman’s oneiric labyrinth as she deals with nebulous and frightening memories. After watching it, more questions than answers remain. It’s Basset’s first full-length film and what a film it is!  Starring the marvelously named Lilly-Fleur Pointeaux, this movie will be available on June 23rd from Artsploitation Films.

Jessica’s (Pointeaux) grandmother dies suddenly, and she’s obligated to attend the wake at the old family home. An ardent practitioner of lucid dreaming, she longs to discover the root cause of her various psychological traumas by delving deeply therein. Now, she dreads the ominous prospect of spending an extended period of time with her mother, with whom she has a troubled and distant relationship.

As the riddles of the truth behind her grandmother’s death and other sundry family secrets begin to toll heavily upon her, she descends further into the Abyss of Morpheus. A strange, acute illness develops that manifests through eldritch fevers and physical wounds that apparently come from injuries in dreams. To further complicate things, revelations about her paternity and the sanity of her grandmother cast doubt over the official story that her mother gives Jessica.

Her mother and step-father take measures to save her, but the fine phloem that separates dreams from reality has already worn thin. The ominous horse-headed specter that pursues her through her dreams becomes more and more dangerous, developing additional levels of symbolism once the grandmother’s belongings are searched. Finally, at the conclusion, certain revelations are shown, only leaving a bigger mystery. 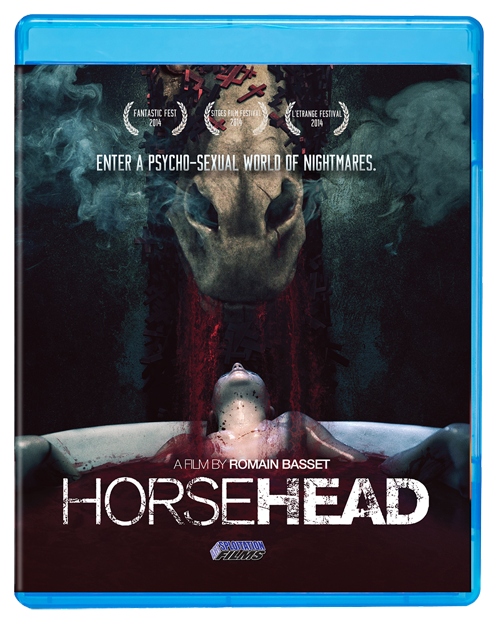 Many things can be said about Horsehead. It is a film that absolutely mesmerizes with its visual presentation. The lush dreamscapes are rather amazing and firmly grasp the viewer’s attention during the movie’s entire length. Every moment is a beautiful composition of color, symbolism, and balance. Hypnotic distortions of time play with the perception of reality and force the viewer to descend with Jessica into the kaleidoscopic dungeons she harbors within herself.

The actors give fabulous performances that draw the viewer right into the milieu of Jessica’s de-realization. A true sense of foreboding and tension pervades the film.

Unfortunately, the story lacks polish and is somewhat confusing, thereby detracting a little from completely enjoying the film. Questions arise that are left unanswered, not provocatively, but rather unpleasantly. It’s as though many doors and paths are presented, only to be ignored in favor of a marvelous, striking show of aesthetic ability. In fact, Horsehead has the feel of the best nineties music videos—the august apex of the art form, as it were (in this humble reviewer’s exalted opinion)—with the dedication to visually impressing the senses at every point. Whether this void in the story is a matter of purposeful mystery or incomplete development is unclear.

However, this should not deter one from watching this film. Simply the presentation alone is it worth enjoying.  Do yourself a favor and treat yourself to an hour and a half of being wowed by Horsehead.