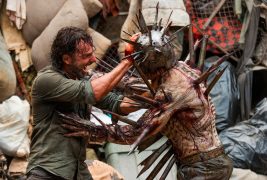 The Walking Dead’s seventh season is over and AMC’s smash hit shambles on.  Following this season’s first half—a stretch this reviewer considers the low point of the series, or the high point if you’re literally jumping over a shark—these most recent eight episodes have been a substantial improvement.  Although, that’s not exactly a ringing endorsement given how awful the first half of the season was.

Prior to the midseason hiatus, we watched our heroes Rick and Carl Grimes (Andrew Lincoln and Chandler Riggs), Maggie (Lauren Cohan), Daryl (Norman Reedus), Michonne (Danai Gurira), Sasha (Sonequa Martin-Green), and the rest completely kowtowed by Negan (Jeffrey Dean Morgan), a smarmy, middle-aged dude—one who cuts a figure as imposing as a wilting banana and who’s armed with nothing more than a baseball bat wrapped in barbed wire.  Yet, Negan and his cadre of fellow mean survivors known as the Saviors managed to render our protagonists entirely passive, undermining six seasons of well-executed characterization and forcing us to withstand eight episodes of absolutely nothing resembling a plot.

That abysmal thread ended with Rick simply deciding to stop doing nothing and instead do something, an underwhelming twist to say the least.  And here we are.

These current eight episodes don’t reveal much in the way of tectonic plot shifts, but they do restart our characters’ proactive quest to fulfill certain goals, namely assembling a coalition of survivor communities to go after the Saviors and take out Negan.  And that, ladies and gentleman, reintroduces tension and plot and all the other sorely missed and most fundamental story elements.

This coalition-building exercise eventually pulls Carol (Melissa McBride) back into the fold and tenuously unites the communities of Hilltop, Alexandria, the Kingdom, and, tangentially, the women of Oceanside whom we met before the hiatus when Tara (Alanna Masterson) was taken in and later had to escape from them.  We’re also introduced to a new group—the Scavengers—a strange, cultish group who inhabit a junkyard.  They’re led by the incredibly odd and compelling Jadis who’s portrayed by genre vet Polly McIntosh, an exciting addition to this topnotch cast.

However, most of the drama this semi-season involves dueling factions within each community comprised of those who want to fight the saviors and those who don’t.  These subplots aren’t as interesting as they are frustrating mainly because they’re not framed by any moral ambiguity.  Negan is explicitly and entirely bad, so not trying to rid the world of him is a nonstarter.  Doing so is an inevitability which makes watching some characters vacillate between vanquishing the bad guy—or not—grow quickly tiresome. 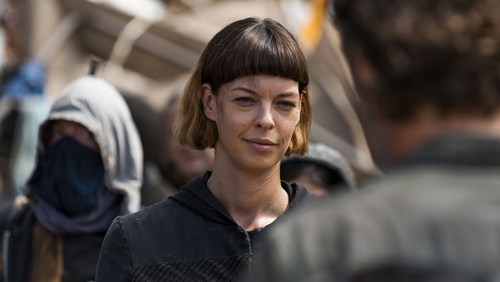 This approach would have been much more compelling had Negan been drawn more dynamically.  For example, if Negan’s worldview was presented to us as morally justified or even plausible in some ways, then the in-fighting within each community about how to approach the Saviors would be a much more captivating angle.  But instead, we’re just sort of waiting for our heroes to do what we’ve seen them do time after time under trying circumstances: kick ass and take names.

While things slowly build toward a multilateral strike on the Saviors’ ironically named “Sanctuary,” Sasha and Rosita (Christian Serratos) head there on their own to kill Negan on something of a suicide mission.  Unbeknownst to either of them, Eugene (Josh McDermitt)—their missing cohort and current captive of the Saviors—has become valued by Negan because of his resourcefulness and intellect.  When Sasha and Rosita make their move and encounter Eugene at the compound, things go awry and Eugene rebuffs Sasha’s attempt to rescue him.  Rosita escapes while Sasha gets captured and we’re left not knowing whether Eugene has actually been seduced by the dark side.

This sets up a finale wherein all the communities finally line up against the Saviors who are on their way to Alexandria with Sasha and Eugene in tow.  Rick has readied an ambush with help from the Scavengers and a turncoat Savior named Dwight (Austin Amelio).  When Negan and his people arrive, the Scavengers reveal they’ve been working with the Saviors all along and turn their guns on Rick and his people.  But just when things appear most dyer, cavalries from both the Kingdom and Hilltop arrive and an action-packed skirmish ensues.  Negan and the Scavengers retreat and the season ends with both sides regrouping and preparing for war.  In other words, the situation is left exactly as it was seven episodes ago.

Compared to seasons past, the sources of tension and plot this time around are a little tame, but at least they exist which is, again, a huge improvement over the first half of the season.  The series has fallen into a pattern that undermines the importance of the episodes between each premiere and finale.  In other words, if the premiere dictates that going after Negan is the major thrust of the plot, you can bet the house that nothing of the sort will happen until the finale.  While this structural predictability doesn’t completely devour the entertainment value of the other episodes, it does rob them of the element of surprise and the inherent tension that it yields.

This season’s finale was, again, full of carnage and it depicted the long-awaited confrontation between Rick and Negan, but it lacked resolution and the catharsis that would result.  We’ve had to endure an awful lot of relatively inconsequential episodes for what ends up being an underwhelming payoff.  And it was a familiar scenario to boot as it recalled the much more gratifying season three finale—the Governor’s assault on the prison—but without completing the story arc.  On its own, the seventh season finale is an entertaining episode, but as a season finale it left this reviewer wanting.

As a huge fan of the show and an outspoken defender of its long-view, character-over-carnage approach, I’ve grown frustrated over the past two seasons with what feels like a series that’s starting to become a victim of its own success.  It set the bar impressively high, but in recent years The Walking Dead has developed a safe formula from which it’s extremely hesitant to deviate.  Unfortunately, that makes it formulaic.  While this series is by no means a bad one yet, and the second half of this season was markedly superior to the conceptually doomed first half, The Walking Dead still feels like it’s on the downward slope after plateauing a few seasons ago.

One thought on “The Walking Dead Season 7 Final Grade”